Anyone for an air source heat pump? 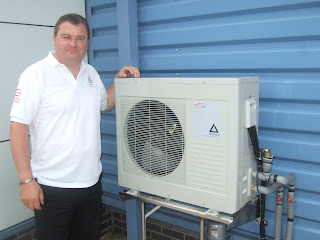 This man is Peter Ferguson and he'd like to sell you one. He owns and runs Trianco, the Sheffield-based, metal bashing oil-fired boiler maker. I spent a couple of hours with him on Monday, listening to his tale and sharing his dreams and aspirations.

Oil boilers are a mature market. There are perhaps a million of them dotted around the country, mostly in out of the way locations where mains gas can’t reach. Each year, 60,000-odd new ones get installed, mostly as replacements. Trianco have a slug of this market, around 10%, but it’s not growing. Oil boilers, just like solid fuel boilers before them, would seem to be yesterday’s technology. Even with the recent move over to condensing boilers, there doesn’t seem to be much mileage left here for long term growth plans.

The question is what will replace them. The world and their aunt are all harping on about renewables and carbon-free or carbon-lite power systems. With climate change slowly moving centre stage, it’s hard not to conclude that this is where the future lies. But there is still a lot of doubt as to which of the new technologies will succeed and which will fall by the wayside.

Ferguson reckons he’s spotted a market gap here and thinks that Air Source Heat Pumps (ASHP) may just be the next big thing. ASHP are the smaller and lesser known relative of the ground source heat pump (GSHP) which has, in contrast, had quite a lot of attention in recent years. ASHP differs from GSHP in three crucial respects:
• it doesn’t require digging up the garden and rolling out 100s of metres of tubing
• instead it works by taking heat out of the air
• it’s cheap compared to GSHP and to all the other green power systems.

To date, people have thought of heat pumps primarily as space heating devices. Ferguson’s Eureka moment came when he saw that it would be beneficial to position ASHP against solar thermal panels, as an alternative method of delivering hot water for the tap. Instead of spending maybe £3,000 or more installing solar panels on your roof, which, if you were lucky, would deliver just over half your hot water requirements throughout the year, here is a solution which would cost half this price and which would provide all your hot water. Because it’s a heat pump, it delivers around three times the energy it requires to run it, so potentially you could draw off say your 4,000kWh of hot water (typical of a modern household of four) for an outlay of just 1250kWh, cost around £100 a year.

He is particularly interested in the small ASHP units, which are rated at 3kW output. The one in the photo I took is the larger 5kW one, so you can imagine that the 3kW one is almost half this size. Crucially, it is small enough to fit through the average loft hatch, and this in itself opens up a whole new market for heat pumps — small houses without gardens. The unit can get plumbed into the loft where the air temperature will, in any event, be a little higher than outdoors, and in about two hours a day it will be capable of delivering 150lits of hot water, enough for a couple of people. It’s not a renewable power source, as it uses electricity, but because the way heat pumps work, it will use about a third of the electricity an electric immersion heater would use, so it will deliver 6kWh of heat energy for just 2kWh of juice burned.

Will it catch on? Well, it may do. The one thing that makes Ferguson very bullish about his ActivAir heat pumps is that he can sell them for £695 + VAT. Compare that with solar panels (at around £2,500), or indeed any of the other renewable or carbon-lite technologies, and you can see that his ASHP units may well find a new market.

The downsides are that the units are a little on the noisy side to be happily operating indoors. And the recovery rate, the time taken to replenish your hot water cylinder, is rather slow. The 3kW unit would take over two hours to recover, as compared with 30 minutes for a similar-sized cylinder heated by a conventional boiler.

There is also the cost calculation to run through. Although ASHP will deliver three units the heat output for every one unit of electricity required to operate it, that electricity is always going to be more expensive than mains gas. And if the mains gas is a third of the price of mains electricity, then your cost saving vanishes. As it stands, mains gas is rather more expensive than this at the moment, but not by a lot, so the running cost saving is there, but only just. Unless of course you manage to run your ASHP unit on Economy 7, in which case it becomes very cheap to run indeed. But then you’d have it whirring away for a couple of hours every night whilst you slept. If you mounted it correctly, you wouldn’t hear a thing, but it would always be a concern that it could keep you awake.

Trianco’s ASHP units are available in larger sizes. As well as the 3kW output, there are 5kW, 7kW and 12kW. This largest size is capable of taking on GSHP as a whole house space heating solution. Many people feel that it’s got to be less efficient than GSHP because outside air temperatures are habitually lower than winter ground temperatures, but Ferguson’s units work at good efficiencies down to —3°C, which is about as cold as it gets in southern England these days. And at £1895, it is way cheaper than any GSHP unit I have come across.

At the moment, Ferguson is importing his ActivAir units from China, but has high hopes of bringing the metal bashing and assembly functions in house as sales demand rises. It’ll be fascinating to see whether he manages to establish ASHP as a serious contender for the future of home heating. It won’t be for a lack of trying.
Posted by Mark Brinkley