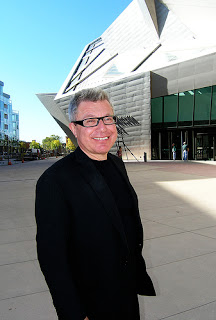 I am always interested in where people come from and I was fascinated to hear world famous architect Daniel Libeskind, at a Shape East event in Cambridge this evening, discoursing on his youth in Poland, where he was born in 1946. He described being taken into the centre of Warsaw by his parents where there was only one tall building, which was the HQ of the Communist Party. It gave him a feeling of dread.

The connection with tall buildings and power has stuck with him. He doesn’t mind tall buildings, it’s totalitarianism that upsets him. He said he has turned down project after project in China because he doesn’t like the regime. He’d much rather tussle with the problems of tough assignments, none more so than his designs for Ground Zero in New York. His original design for the Freedom Tower was to have been 1776 feet tall, to reflect the year of American Independence. He calls it embodied justice.

Incidentally, by my reckoning he looks rather like Elton John, but he talks more like Woody Allen. That alone makes him quite a draw. He doesn’t appear to have got his first commission until the age of 43 but has signed off over 25 major projects since. In terms of global impact, he is now only rivalled by Frank Gehry. They have a lot in common but, whilst Gehry is known for his impossible curves, Libeskind is all about unfeasible angles and shards of light. They have both achieved fame and success through designing iconographic museums, which then went on to be commercially successful. Now he is inundated with requests from developers who want to build shopping malls that look like off-the-wall museums, hoping to add cultural significance to the shopping experience.
Posted by Mark Brinkley