How I became a Moisture Maven

When we built our house in 1992, ventilation was one of the things I knew next to nothing about. We just went along with the suggestions of our designer and business partner at the time, Robin Gomm, combined with the wisdom of our electrician. We went conventional, which meant that our windows came installed with trickle vents and our wet rooms had the standard extract fans installed.

Now I never liked those pesky trickle vents. It seemed to me that they either did nothing at all or they blew a gale through them. There didn’t seem to be much in between. Bit by bit, one at a time, I started closing them off — they are the type that has a hit and miss slider that enables you to close them. After a few years, they were all closed. It really didn’t seem to make any difference to the way the house felt or smelt.

Then one day about seven or eight years ago, the fan in the en-suite bathroom cut out. It has been strategically mounted in the ceiling directly above the shower, and it was connected to the outside via a duct going up through the attic above and out via a vent tile in the roof. Up until then, I had religiously turned the fan on everytime I took a shower and my first thought when it broke was “Must get that fixed at once.” But, of course, a fan in your ensuite bathroom isn’t exactly a life and death issue so I left it for a few weeks. And I watched to see what difference it made.

The answer was none at all. This is what set me thinking about ventilation, relative humidity levels and whether our present routines make sense. Here we had a fairly small, enclosed space, our ensuite bathroom, with no trickle vent open and no extract fan, and yet even in the depths of winter, there was no problem at all with excess humidity. Showers throw off a lot of water vapour and we typically find that the window and the mirror will mist up after a shower, but within a few minutes it’s all gone and everything appears to be normal once more. And having trickle vents open and fans on didn’t appear to make the demisting appreciably quicker.

At this point, I went out and bought some hygrometers. They were only simple little greenhouse-style ones, costing two or three quid, but they served my purpose. It turned out that the relative humidity levels in the house tended to settle at around 50% to 60% throughout most of the year. After a shower, the levels would rise to 80%, sometimes near 90%, but they would settle back down within fifteen or twenty minutes. If the door remained closed, it would stay humid much longer, but if the bathroom door was left open, the humid air would seem to mix with the dryer air and the normal humidity levels returned very quickly. All without any obvious ventilation at all.

But there was another unexpected consequence of my data logging. According to classic water vapour theory, the reason the inside of houses have a higher absolute humidity level than the great outdoors is because we live in them. We not only shower, but we breathe, sweat, cook and wash. We produce water vapour by the proverbial bucketload. 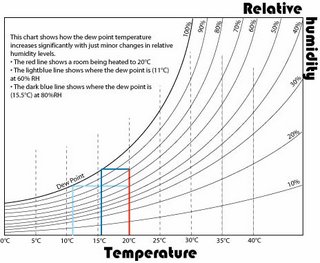 So if we are responsible for all this water vapour, it should stand to reason that if you take us away for a few days, the humidity levels in the house should fall back into equilibrium with outside. And by equilibrium, we are referring to a state where the vapour pressure indoors matches that outdoors. This would suggest that in winter, the indoor relative humidity levels should fall back to around 25% or 30%. Use the accompanying chart to work out the difference between absolute and relative humidity levels.

So what happens when we go on holiday or away for the weekend and remove the source of all this water vapour? Relative humidity indoors doesn't fall at all, it sticks at the 50% to 60% background level that occurs when we are in residence.

There must be some unanticipated processes at work here. It could be that our house is so badly built that it self-ventilates through the fabric and therefore my findings are irrelevant. But that wouldn’t explain why the humidity levels remain higher indoors than outside even when we are away. I suspect that it’s got a great deal to do with the moisture buffering idea that I have been going on about in recent posts, but moisture buffering is a hard thing to measure, so my theory has to remain untested. Bearing in mind that there is about 100 times more bound water in the structure and furnishings in a house than there will ever be free floating water vapour in the air, my guess is that there is a sort of natural evaporation/absorption rate inside a house, which is largely determined by temperature, the humidity and the moisture content of the surrounding materials, and that the materials are capable of altering their moisture content without us ever being aware of it. In short, the house acts a bit like a sponge, soaking up and giving off water as conditions dictate.

Only where you have bathrooms made up of entirely non-porous materials do you start to get problems with condensation. Or when you let the temperature of a room fall below dew point, somewhere around 12°C. Then you will start to see condensation and mould growth. If you keep the rooms reasonably warm and you have materials capable of absorbing excess moisture, then I don't think condensation is ever going to be a serious problem. Misting mirrors doesn’t count as serious.

I am not so stupid as to believe that my homemade experiments constitute serious scientific investigation, but they are interesting to my mind because they are reasonably consistent and they indicate that something is amiss with our conventional understanding of the issues. If my pet theory is right, then we are guilty of over-ventilating, in order to remove a suspected hazard (excess water vapour) which seems to be largely self-regulating. In the short term, this is not a subject that is likely to get heavily researched because there isn’t a product or group of products out there waiting to be sold. Unless someone comes up with one. Anyone for vapour permeable wall tiles?
Posted by Mark Brinkley