The Little Known History of the Vapour Barrier

Like many aspects of building physics, vapour diffusion first became the subject of academic study because there was a problem that needed both an explanation and a solution. The story is told in fascinating detail in William Rose’s book Moisture in Buildings. The problem was first noticed in the 1930s by American house painters engaged on painting the external timber claddings, or sidings as they call them, which were and still are so prevalent there. They reckoned that they were getting more problems and more call backs on jobs where the walls had been insulated. Ergo, there was something about adding insulation to the walls that was causing the paint on the wall sidings to peel, crack or whatever.

Now, in the 1930s, placing insulation in walls was a relatively new idea and the businesses making insulation were keen to see that this new business venture wasn’t killed off by complaints from painters before it had got going. So they set out to investigate.

The obvious conclusion would have been that the insulation had the effect of making the external face of the walls colder, because less heat was coming through from the house, and that the timber claddings would be therefore be subject to more frosts and more dew, and these actions would combine to shorten the life of any paint treatment.

But that wouldn’t have been a helpful conclusion for the insulation industry, because there would be absolutely nothing they could do about it. Instead a number of researchers, notably Larry Teesdale of the US Forest Products Laboratory and Frank Rowley of the University of Minnesota, came up with an alternative explanation based around the idea that water vapour will tend to diffuse through solids, from the warm, relatively humid internal atmosphere inside a house, towards the outside where the vapour pressure was demonstrably lower. Diffusion theory it was called. Rose comments in his book that “diffusion theory was proposed as the explanatory mechanism not because it was validated or shown to explain the observations, but because it was analogous to conductive heat flow, which Rowley was most familiar with.” 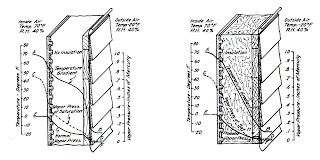 In other words, the building scientists had already created a model for walls where the heat was shown being conducted through the wall, and drawn diagrams of how the temperature gradients were likely to look through a wall. Now they could do the same thing with vapour pressure. In 1938, Rowley produced a seminal paper which drew both a temperature gradient and a vapour pressure gradient through a wall section. He then went on to carry out tests in laboratory wall assemblies, funded by the US Mineral Wool Association.

Rowley was able to demonstrate in his climate chamber that vapour diffusion was taking place and that, critically, condensation could also occur if the conditions allowed. How closely his climate chamber reflected what actually happens inside houses is a matter of debate: for one thing, Rowley took great pains to eliminate the effects of both radiant and convective heat transfer, because the whole theory rested on comparing the rates of heat conduction with vapour pressure. Rowley’s conclusion was that the problems that the house painters had been experiencing with wet claddings could be eliminated by stopping vapour diffusing into the wall assemblies.

The story is eerily reminiscent of the recent debates about the testing of multifoils. When the multifoil manufacturers test, they get a positive result: when the competition tests, the results are negative. Back in the 1930s, there was no competition and the results of Rowley’s theories and tests became enshrined in the building codes throughout the world. The fact that his research was being funded by insulation manufacturers, who had a vested interest in its outcome, was overlooked.

Because Rowley had unearthed a mathematical model for how moisture would behave in a wall, the chances of condensation occurring could now be calculated according to a formula including internal and external conditions, and the permeability of the materials. In essence, the conclusion of his work was that the damaging effects of moisture build-up in walls would be eliminated if a vapour barrier was fitted on the warm side of the wall.

The fact that his initial experiments were carried out in conditions very different to the typical house wall was ignored. In testing for vapour diffusion, he deliberately eliminated the effects of heat transfer by convection, radiation and air movements. He was also only measuring the airborne water vapour in the air: the far bigger reservoir of bound water in the materials was overlooked, possibly because it wasn’t generally understood at the time.

The Americans call Rowley’s theory the profile method. In Europe, it is referred to as the Glaser method after a German researcher who undertook a similar series of experiments in the late 50s. They are predicated on the idea that vapour will diffuse, unimpeded, through solid objects and that at a certain place, if the conditions are right, the vapour will reach a dew point and condense. Rose writes: “This impression is decidedly incorrect. The principle criticism of the profile method is this: it cannot detect types of moisture problems other than those related to diffusion. An informal survey among building scientist colleagues seems to indicate that diffusion-related moisture problems account for less than 1% of moisture problems found in buildings. We have been seriously side tracked by the emphasis the profile method has received in the last 50 years.”

Yet this analysis of how we should build timber framed wall and roof assemblies still lies at the heart of our building codes. BS5250 is the relevant standard which informs our building regulations and its Condensation Risk Analysis, which it suggests is carried out on timber frames structures, is still in essence the same calculation which Frank Rowley worked out in 1938. Despite there being a huge amount of work out there now which contradicts Rowley’s original research, the profile method, and the resulting use of the vapour barrier, are still seen as essential components of good building practice.

The fact that the profile method is nearly irrelevant can be demonstrated by a simple experiment, as described by Rose. Take two sealed jamjars. The first is left empty, the second has a small piece of wood placed in it, about the size of an ice cube. Sensors are placed in the jamjars measuring both temperature and relative humidity. The jamjars are then gently heated. In the first jam jar, just as you would anticipate, the relative humidity level falls because the amount of water vapour present is unchanged but warmer air is capable of carrying more water vapour. The second jam jar sees a very different result: the relative humidity level increases. Why? Because bound water present in the timber is driven out by the higher temperature. It is a simple demonstration that shows just why the traditional view of how water vapour behaves inside a house is misguided.

The American building science community is at long last getting code-making bodies like ASHRAE to take on board the study of moisture loading and to allow calculations of safety levels for this new approach to moisture management. In the UK, the expert on these issues is Chris Saunders, who works at Glasgow Caledonian University. He authored an interesting paper for the BRE on moisture modelling in buildings (IP2/05) where he points out the inadequacies of the traditional Condensation Risk Analysis. The problem, from a practitioner’s point of view, is that what actually goes on inside a wall assembly is far more complex than the profile method makes out, and this does nothing to make modelling any simpler. There are some more sophisticated predictive models around which take into account air movement, porosity, water sorption coefficients and other factors, but they don’t always give clear answers and sometimes, in the case of many timber frame wall designs, the answers are not so very different from the original profile method answers. So although we now know a lot more about the workings of water vapour in buildings, it hasn’t made their design any easier.

In particular, just the role of the vapour barrier is cast into doubt, the requirement for effective air barriers has come into focus. Vapour barriers? Air barriers? Are they really so different? It would appear not. The basic routine for both is polythene sheeting, placed directly behind the plasterboard, only an air barrier has to be far more carefully constructed than a vapour barrier. Whilst we can now see that Rowley’s vapour diffusion theories were misguided, it doesn’t appear that it is going to make a huge difference to the way we construct timber frame walls and roofs.
Posted by Mark Brinkley