Our Planning Application in - at last 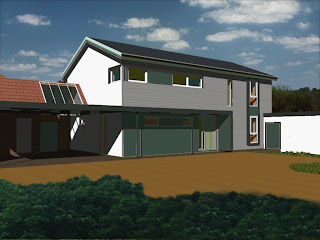 153 days. That’s what it’s taken us to put a planning application together for our new house, pictured here. If that seems like a long time, I would hazard that it is much longer than most people spend on it.

In fact, when Oliver Rehm, the architect who heads up the Baufritz UK operation, signed us up for their design service back in February, he thought that we could have completed the design side in a month. The fact that is has taken so much longer is largely down to our prevarications and to a feeling that we really don’t want to start changing our minds after the application has gone in. Having been telling people not to for so long, now I have been hoist by my own petard.

The deal so far is that Baufritz are charging us £6,000 for the design work. If and when we get a successful planning permission sorted, we then negotiate Part Two of the contract, which is the build. In fact, there is no obligation to go with Baufritz for Part Two, but it would in all likelihood take some sort of falling out for us to part at this point. This aspect of building a prefabricated German house is surprisingly daunting: the fact that you have to make gob-smackingly large financial decisions at the outset is just a bit frightening. It’s not quite like buying an expensive car when you can compare the prices between showrooms: a one-off house is just not like that. All we really had to go by was that the ballpark figure Baufritz had quoted at us was £1500/m2 internal floor area, not including foundations. I needed to see if this figure did actually transfer across to the house we have designed — and designed quite deliberately to be simple and easy to build.

When Oliver produced a 32-page costing file with a total almost exactly around this figure, base on the designs we had agreed, then one of my main fears was allayed. Now I don’t know whether Baufritz will be able to hang onto this £1500/m2 figure for long: timber prices are rising for the first time in my lifetime, it would seem, and Baufritz houses are mostly timber. But I think it shows that they are a good bunch of people to deal with. In fact I knew that from the moment I first met them last year, but it’s always nice to have your first impressions confirmed.

That’s not to say there haven’t been one or two hiccups along the way. I am still holding fire on their claims to be building Carbon Positive houses: they have shown me their calculations and I think they are conveniently missing off the carbon contributions from items that they don’t supply, principally loads of concrete going into the foundations. And it’s not at all clear to me that carbon captured inside timber (which is the basis of their carbon positive claims) has really been sequestered. More like held captive for the duration of the life of the house. But the claim certainly has some merit, if only in that it gets you thinking about the carbon footprint of something as large as a new house.

I was also surprised to see that the standard roof panels are only 200mm thick, as compared with the 400mm thickness of the wall panels. This makes quite a difference to the U values. Whereas the wall scores as low as 0.16, down at Passive House levels, the roof is 0.22, which barely scrapes through our current building regulations. For something selling itself on being a low energy house, this seems an unlikely oversight. Baufritz offer an upgrade, adding more insulation to bring the roof U value down to 0.16, but this is charged as an extra.

But these are quibbles. Overall I am still delighted with the service we have received thus far and the standard of the product that they deliver. As well as having now visited their factory and showhouse in Germany twice, I have seen their first UK house being erected in Cornwall, as well as having been shown around the showhouse they built at the Grand Designs show last month. So I am bit-by-bit getting familiar with the whole process and the product they make.

And the 153 days it has taken so far? What Oliver said to us back in February was that we could have a completed house to move into 32 weeks after we have obtained planning permission. That’s amazingly quick, by anybodies standards, and, as we don’t really want to be moving in till summer 2008, there hasn’t been a load of angst about “hurrying on” and “getting started” which I know bedevils most British selfbuilds. So we’ve taken our time, gone through no less than five versions of how the house might look and tried to think through all the different options before submitting plans. It’s still a very difficult process, because you can really only ever go so far with plans and computer animations: you have to take a leap of faith that everything will be alright and I know from experience that it never quite is. But I think it’s been 153 days well spent so far.
Posted by Mark Brinkley

Email ThisBlogThis!Share to TwitterShare to FacebookShare to Pinterest
Labels: Planning