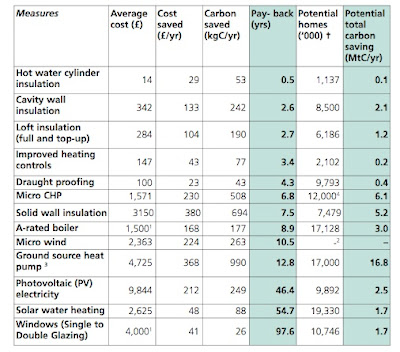 As part of its widespread review of our energy saving strategy, the government published a paper in November 2006 called the Review of Sustainability of Existing Buildings. It’s a critical issue both for national policy and for the homeowner seeking to reduce their fuel bills and their carbon footprint.

Buried within this document is a table, which lists 13 energy saving measures that can be carried out on existing homes, together with a breakdown of costs, payback periods and energy saving potential. It makes startling reading for anyone considering a house renovation. The most effective measure is listed as providing insulation for your hot water cylinder, at a cost of just £14 and an annual saving of £29: in contrast, the least effective thing you can do is switch from single glazing to double glazing, something which will cost you around £4,000 and will only save £41 a year.

However, as a guide to what to do, this table is horribly flawed and contains a number of glaring errors. The single worst of which is that the savings suggested are not cumulative: if you added together a basket of measures you might take to refurbish a house, the savings appearing in this table come to more than the total energy usage of the house before any renovation has taken place. Clearly that is a nonsense. For instance, whilst installing an A-rated boiler might just save you £168 a year if you took no other energy saving measures at all, this saving reduces dramatically when you insulate the loft, the walls, fit double glazing and draft proofing, not to mention providing a hot water cylinder with an insulated jacket. Whilst this might appear to be blindingly obvious, it appears to have escaped the attention of the authors of this report, who use this saving rate to calculate the potential for energy saving throughout the whole country, simply by multiplying the potential saving in each home by the number of homes without A-rated boilers, some 17 million.

It gets worse. There are some frankly unbelievable figures in here. The amount of saving from solid wall insulation (as opposed to cavity wall filling) is down at £380 a year. Seeing as the average gas bill for an average house (which this is supposed to be modelled on) is between £500 and £600 a year, which includes heating domestic hot water and cooking, as well a boiler loses (by not having that A-rated boiler, estimated at around £168, remember), they are claiming that you will virtually eliminate your space heating bills by applying solid wall insulation around your house. Writing as someone who once did this exercise, I can assure you that this will not happen!

The micro wind turbine appears in the table with a saving of £224 a year. I have no idea where this figure comes: even the very generous estimates provided to us by the manufacturers don’t suggest that a wind turbine can provide more than 1,000kWh of electricity a year, which is worth about £120 (if you have a particularly penal tariff!). Actual returns from micro wind turbines fitted are coming in at far less than this: indeed several have been fitted thus far that have yet to produce any electricity at all. So how the table manages to come up with a 10.5 year payback I have no idea.

It’s not much better with photovoltaic solar panels. The table suggest that for an outlay of £9844 (before grants), you can hope to make a saving of £212. That sort of money will buy you nearly 10m2 of panels which should, if you are lucky, produce around 1,000kWh per annum. To buy this at 9p/kWh would cost you £90, so unless you are buying electricity at a whopping 21.2p per hour it’s hard to see how you would obtain a saving of £212.

The ground source heat pump example isn’t any better. For a start, they are not really recommended in properties that aren’t already heavily insulated and have comparatively low heating demand, ideally delivered by underfloor heating. It’s not something you should consider powering a house with no loft insulation, no wall insulation and single glazing. No way. But the authors of this report are suggesting that it could be used in 17 million homes (that’s every one with a garden) and that it could save a tonne of carbon emissions in each one, saving the residents £368 on their gas bills. Phoey. Whilst ground source heat pumps have their place, and may reduce gas bills substantially, they do it by racking up rather large electricity bills instead (especially in uninsulated homes!). This seems to have completely escaped the report writers.

So please handle this information with care. I know it’s not intended to be guidance for the individual homeowner, but if it was accurate there is no reason why it shouldn’t be used as such. But it’s not accurate. Not at all. If that’s the standard of the advice the government is getting about this issue, then heaven help them in their drive towards a low carbon economy.
Posted by Mark Brinkley