How housing demand is assessed

The housebuilding lobby insists that demand for new homes is outstripping supply, and that this has been the case for many years, decades even. But whilst it is fairly straightforward to measure housing supply, how is demand assessed?

One place to look is Kate Barker’s review into the state of UK housebuilding. Her brief was to look at supply side issues but she does acknowledge that the relationship with demand is complex. She makes the crucial point that simply increasing the supply of new homes may in itself affect demand: Higher rates of housebuilding could also lead to higher household formation rates. (Barker Report 1.43). But she doesn’t really explore these issues in any depth.

A more fruitful area to dig in is the work of the Cambridge Centre for Housing and Planning Research. They have produced various pieces of research on housing need and housing demand. One piece in particular, More Households to be Housed: Where is the increase coming from? by Alan Holmans and Christine Whitehead, is very pertinent and seems to set out the methodology for how these figures are calculated. Which is:
• work out how many more old people there are going to be
• work out how many more broken families there will be
• work out what net migration levels will be.

The answer habitually comes out at something like 215,000 extra households per annum. So this figure is taken as the basis of housing demand. And if we build less than this each year (we do), this is responsible for the shortage of housing and, it follows, the increase in house prices.

But dig down into Holman’s and Whitehead’s report and you can begin to uncover a number of assumptions and guesses that call into question the accuracy of their work.

• whilst it is easy to measure the marriage rate and the divorce rate, because each event is recorded, there are no accurate figures for co-habiting couples, nor for what happens to couples (both married and co-habiting) once they separate. How many couple up again? No one knows, they just guess.
• migration rates: everyone knows that the amount off net migration in the past few years has been enormous, but no one knows just how enormous. Not until the 2011 census will there be any hard figures to go on, and even then, it is widely anticipated that illegal migrants will mostly not appear on the census
• longevity: we are as a population living longer and the models build in an assumption that life expectancy rates will continue to increase at the rates they have done over the past century. But will they? Again, no one has a clue. 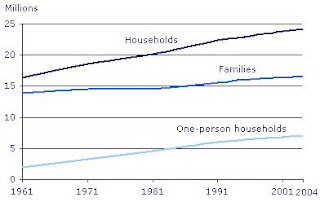 But even if their assumptions are correct, there is still a fundamental flaw in the way their demand figure is arrived at. It’s all just too mechanistic: the model makes no allowance for the fact that demand is itself affected by supply. The size of the average household has been falling consistently ever since records began, but does this represent a profound social change or is it simply a reflection of the fact that there are far more houses around now and, given the choice, many people would prefer to live on their own or in small units. Back in Victorian times, it was not unusual to have families of seven, eight or nine living in two-up, two-downs. For them, this was normal; for us it would be seen as appalling overcrowding.

What this demonstrates is that our standard of living has increased and we now expect to share bedrooms with no more than one other person. And without setting a notional accommodation standard for the country as a whole, how is it possible to determine whether our housing demand is real or just aspirational. If our aspirations are to live in smaller and smaller household units, then we cannot hope to meet demand until such time as everybody has a house of their own. Or maybe two. Why not?

So demand as it is now defined will remain unquenchable. If we were to be building, say, 300,000 new homes a year, rather than 180,000 that we manage at present, we would simply be the moving the goalposts and would fine that the demand for new homes had inexplicably risen to 350,000 a year. And probably work out all manner of household formation statistics as if to prove it. The tail appears to be wagging the dog.

So behind this lies a debate which has yet to be started. The subject is this: Is it the responsibility of government to provide a home for everybody who wants one? And does this include everyone who pitches up on our shores in future? Or do we now have to accept that that there must be limits to household growth, and learn to adapt to what we already have?
Posted by Mark Brinkley