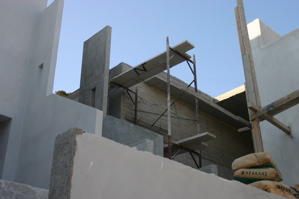 Prior to this August, I had last visited Greece in 1980, when I laboured on a new home under construction on the island of Paros. I remember how relaxed it all was and how primitive it felt in comparison to how we were building in England at that time.

This summer we holidayed on Crete and I had the chance to renew my acquaintance with Greek building methods, as there was a new home under construction barely 200 metres from our villa at Istron Bay. How little things seem to have changed. The actual house was, or will be, a stunning addition to the coastline when it’s finished, but the building methods seem to be incredibly slow and disorganised. Maybe it was the August effect – it’s a bit hot to race around much in Crete in August — but even so, the pace of work was ridiculously slow. Just about the only progress of note that took place during our weeks stay was the top two metres of a chimney being built-up in clay blocks: this took a mason and a labourer about two hours, much of it spent shinning up and down a scaffold tower without a ladder in sight.

In fact the whole scaffolding/access arrangements were not just primitive but verging on the bizarre, to my eyes. Most of the scaffold was timber, built-into the walls and never more than two boards wide. It’s hard to see how anyone could work effectively off it, let alone safely. But I don’t think health and safety features very highly on Cretan building sites. Afterall, back in 1941, these guys’ grandfathers thought nothing of slitting the throats of German paratroopers as they fell from the sky: I don’t suppose their grandsons would be too impressed by risk assessments or method statements.
Posted by Mark Brinkley