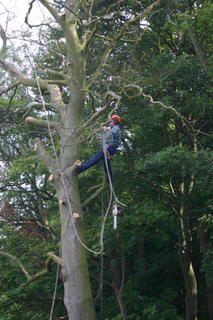 Today is a big day in our road. Our neighbour Tony’s beech tree is to be felled. It’s mature, at least 50 ft high, and it’s now very dead, killed in part by the recent droughts. It’s also in an awkward spot, right next to his garage and, indeed, no more than about 50 ft from where I am sitting right now, typing this blog! It can’t just be felled; it has to come down branch by branch. If all goes badly wrong, this will be the last post….

What the hell does it cost to fell a beech tree? Tony had three quotes, which ranged from £500 to £800 plus VAT and excluding any value that the timber might have, which goes to the fellers as well. If it could be felled, lumberjack-style, with cries all around of “Timber,” it would be quite a bit less, but because of its position it has to come down bit by bit. Touch wood.

Although the main stump is good and straight, it’s all set to be turned into nothing more interesting than firewood. I asked Tony, who is a skilled woodworker, whether he didn’t fancy a beech worktop or two, but he wasn’t moved. “Don’t like beech, it’s very dull.” So firewood it is.

The tree surgeon, Paul Batram, from Ipswich, appeared with his mate and a large shredder around 9.am this morning. They had finished by 2.30pm. In between times, he had swung around in the branches doing a passable imitation of Tarzan, only wielding a chainsaw. It was an awesome site. Each section-to-be-cut was first roped up, then cut, then directed down to the ground by the mate wielding the rope. Gradually, Paul worked his way up to the very top and then he began to take down great chunks of the stump from above his head. By now it was getting a little hairy just watching this from across the road, wondering how he was going to achieve all this without killing himself. As he worked down the main stump, his mate on the ground played an ever more crucial role, ensuring the falling sections didn’t take Paul down with them. The last few sections were actually pulled down with ropes from the ground, using their pick-up truck, Paul having first sawn through 95% of the trunk from a ladder.

I spoke to Paul whilst they were clearing up and he said that he had been doing this since 1967 — he must be at least 60 by now, but is lithe as a cat and must be fitter than many men half his age. “I’ve had a couple of falls, mind, which aren’t too clever, but this game certainly keeps you fit.”

If you ever need a tree lopping or taking down and it’s in a difficult spot, I really don’t think you could do better than this guy. He works all over East Anglia and even down into London, though “as infrequently as possible.”

If you ever fancy moving a tree, rather than cutting it down, there is a business called Practicality Brown, based in Oxfordshire, that specialises in this. They hire tree spade machines by the day. A 1100mm diameter machine moves trees with max diameter 10% of spade size (e.g. 110mm) and costs c. £750 for a day’s hire, according to location of work. The average number of trees moved per day would be 15 and guying and feeding each tree costs around £50, therefore the cost of moving 15 x 100mm diameter trees is around £100 +vat each. They have a larger tree spade to move trees up to 160mm diameter, costing an average of £170 each, based on 15 trees. Trees above 160mm diameter can be moved by crane, with costs starting at £2000 each - yes, the costs increase dramatically with tree size.