Avoiding drain smells in the bathroom

I have used an air admittance valve on my soil stack which has worked fine for the three months since we moved in but we now seem to have smells emanating from the wet floor drain in the shower/toilet and, more recently, from the washbasin in the bathroom. Would an open-vented stack fix this?

The probable cause of your problem is the failure of the water traps in your shower and your basin. However, it's difficult to pinpoint the precise reason for this as there are several causes of trap failure.

The commonest one is due to something called 'induced siphonage': this occurs when the water in the traps gets sucked down the waste pipes by pressure created by stuff happening elsewhere in the waste system.

Why should this happen in some systems and not in others?

There are a number of identified causes: the waste pipes maybe the wrong size for the appliance, or the individual runs are the wrong length or laid at the wrong fall, or the jointing with the soil stack may be too close to other connections. The best practice notes for what should happen, in an ideal world, in order to avoid these problems are all set out in Part H1 of the E&W building regs, but these are often ignored (they rarely get inspected) and are sometimes just impractical to install in any event.

If the water traps fail, then there is an obvious risk that drain smells will waft up into the bathroom. The vented soil stack is a designed as a failsafe in event of the water traps failing: the bad smells will usually take the route of least resistance, being straight up the stack and out through the roof. An air admittance valve (AAV), used more and more widely these days in place of vented soil stacks, does not provide nearly such a good escape path for bad smells; they only open when there is a significant pressure imbalance between the waste pipes and the surrounding house. If your waste traps have failed, the bad smells will be far more likely to seep out through your plugholes than through your AAV, as your traps have now become open pathways for the foul air.

What to do about it? One potential solution might be to replace the AAV sitting at the top of your stack with a full height, open-vented stack, exiting through the roof: it might just do the trick, but it might not. If that doesn't sort it, then you then have to re-plumb the waste runs. 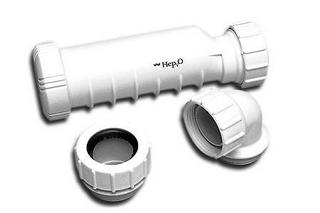 If you do, then consider replacing the existing traps with Hepworth HepVO valves (pictured adjacent, pronounced Hep Vee-Oh), a patented non-return valve which has been on the market since 1997. The HepVO valve system is engagingly simple to understand. There are only three components; the valve itself which looks pretty much like any other piece of pushfit plastic pipe fitting, a straight connector and a knuckle or bend, each available in two sizes (32mmm for basins, 40mm for baths). The innovation is inside the valve where a one-way membrane is stretched across the walls: this allows water and air to pass through it downstream into the waste pipes but stops foul air passing upstream into the house. They are widely available from plumber's merchants (though they sell remarkably few, it seems) at a cost of between £12 and £15 a time.

Earlier this year, the BRE (Building Research Establishment, the UK's premier building research body) published an assessment* of the product. It was remarkably positive about the valve in almost all applications you could think of using it but one conclusion was particularly interesting: it suggested that when you use two or more HepVO valves in a top floor bathroom, you no longer require either an open-vented soil stack or an AAV stub-stack arrangement.

So if you can get access to the traps that are defective, I would have thought replacing them with HepVO valves would be a very good move.


* 'Self-sealing waste valves for domestic use: an assessment BRE Paper IP5/05 by White, Griggs and Sutcliffe.' This paper is also of interest in that it highlights ten causes of water trap failure being:
• self siphonage
• induced siphonage
• compression or positive pressure
• evaporation
• wind effect (aka wavering out)
• foaming
• momentum
• capilliary action
• leaks
• movement (boats and caravans only, or possibly earthquakes)

Who would have thought the humble water trap could be so cursed!
Posted by Mark Brinkley