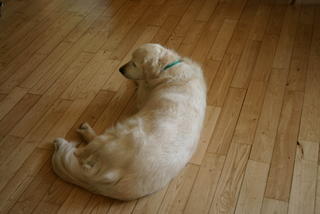 The real reason we went to Crete had nothing to do with soaking up the sun. It was to enable the ground floor of our house to be properly sanded and sealed. After twelve years, and a previous attempt that we rushed, the floor was well ready for an overhaul.

The job was undertaken by a local business called The Traditional Flooring Co, based in Gt Eversden near Cambridge, who had, earlier in the year, installed some Marmoleum for us in a bathroom refit. The job was arranged in February, and the holiday booked at the same time, so that the whole thing could be undertaken as seamlessly as possible. Steve Jones, the proprietor, was as good as his word and he and his crew turned up at 9am on the Tuesday morning of our departure, and we left for the airport an hour later, having removed the sofas and the Welsh dresser. On our return from Crete, a week later, the job was finished and the floor looked absolutely stunning, having been given three coats of Bona Kemi Traffic, a two part water borne polyurethane floor lacquer “for areas subject to extremely high usage where a very matt or near invisible finish is required.”

I must admit that when I agreed the quotation six months ago, I didn’t pay much attention to the amount. I was, frankly, just delighted to be able to get the job done when we weren’t in the house. Now that I am about to write a cheque out, it suddenly dawns on me what an enormously expensive operation it’s been.

The bill, including VAT, is £1968. The area sanded and sealed is around 75m2, give or take the odd kitchen cabinet, so that translates as just over £25 per m2. My first thought is “that’s outrageous, you can install a new floor for less than that.” But subsequent thoughts add a little realism. Although it’s nominally 12 x 6 m area that’s being sanded, it’s subdivided into four rooms, each with numerous projections and indentations: i.e. it’s really fiddly. I can see that it would take at least 30 hours to sand this all down, most of it spent on the edge sanders – remember sanding is a three stage process in itself. Add in another 10 hours for the three coats of Bona Kemi, plus the cost of this as well as the sanders, and you can see that Steve’s quote doesn’t look so outrageous after all. It probably represents a 50% mark-up on his own costs: that sort of mark-up is worth paying for a job done well (it has been) and done on time (it was).

But it does make you realise just how much it costs to keep a hardwood floor looking good. I checked back to my records of how much this floor cost to install back in 1992. The French chestnut was bought from Petersens in Aylsham, Norfolk at cost just under £1500. I remember thinking I’d got a bargain, but back then I didn’t know about the reburb costs.