The thermal store has been knocking around for a long time (at least since the 1980s) and in truth it’s had rather a chequered history. The concept is simple: it’s a hot water battery. You use it like a bank account — in fact, some people prefer the term heat bank to thermal store: you add heat from whatever source you choose, and you withdraw heat from it for your space heating and domestic hot water, indirectly via heat exchangers. As water is capable of storing around five times more heat than concrete or any other solid building material, many designers have got very excited about the possibilities for thermal water storage.

Over the years, the performance of thermal stores has struggled to live up to the hopes, and many of the early examples ended up being energy drains. Space heating and, in particular, domestic hot water require relatively high water temperatures and the fact that the thermal store has to deliver them indirectly, via heat exchange coils, meant that the water in the tank had to reach 80°C in order to deliver an acceptable output and this factor more than cancelled out any potential energy savings. 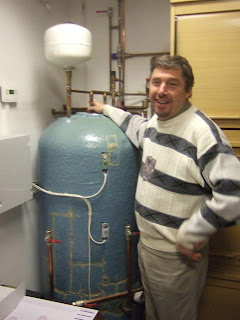 However, there is one man in Britain who has been busily beavering away on the design of thermal stores for years and he thinks he has overcome most, if not all, the problems relating to thermal stores. That man is Brent Witherspoon, pictured here with one of his prototypes, his company is Chelmer Heating. He has built up a successful business supplying whole house heating systems based around his thermal store designs and he is about to launch another thermal store, known as the EcoCat.

I went to see Brent just before the Xmas break and he spent two hours telling me all about the EcoCat and the thinking behind it. Whereas his existing thermal stores are designed to run on Economy 7 or to be hitched up to an oil or gas fired boiler, the EcoCat is aimed at green power sources, specifically heat pumps, solar panels and wood burners. In particular, Brent sees the EcoCat as a solution to a problem heat pumps have in producing domestic hot water: whilst they work efficiently at raising temperatures through 35°C (enough for underfloor heating), they don’t look so clever when asked to do more work. If you want hot water for the tap at 60°C, then you might just as well use an ordinary electric immersion heater, which is what a lot of heat pump designs do (though they tend to keep rather quiet about it). The Eco Cat is designed to get around this by incorporating an unvented hot water cylinder within it. When the sun shines, the solar panels will supply the bulk of the domestic hot water: and when it doesn’t, there is a small electric boiler to boost the temperature up from what the heat pump can sensibly do.

The EcoCat addresses another problem which Brent has identified: the typical output of a heat pump is 40lts per minute, whereas the typical requirement for an underfloor heating system is less than 20lts per minute and, when some of the circuits are shut down, this can fall to just 5lts per minute. This imbalance results in the return temperature of the water in the underfloor heating system being too high for optimal efficiency, which causes the heat pump to turn on and off far too often and thus perform way below the intended efficiency level. Brent’s design sidesteps the problem by asking the heat pump to heat the water in the EcoCat, rather than feeding directly into the underfloor heating system. It’s an interesting feature and it’s one that thus far Brent is having trouble convincing heat pump manufacturers that they actually need!

But the principle of the EcoCat is to take the proposition of the thermal store and refine it to the point where it really does add value. As you might imagine, it’s quite a complex beast and it sells for over £2,000, way more than any conventional water storage medium you might choose as an alternative. On the other hand, it’s cheaper than virtually all the low carbon and renewable technologies you might think of using in a new house and its purpose is primarily to get them to work together in the most efficient manner possible.