Are these no heat homes? 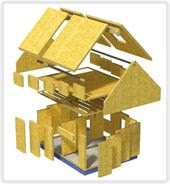 “We are building homes with no heating systems already.” That was the bold claim made to me by Andy Porter of SIPS@CLAYS at the Harrogate Homebuilding & Renovating show back in November.

And so it came to pass that on Wednesday of last week, I met up with Andy and he took me to see two of their newly completed homes, one near Beverley in Yorkshire and the other in Accrington, Lancs, both of them what I would call classic selfbuilds.

Both homes had been constructed with Kingspan Tek SIPS panels, 142mm thick, with a U value of 0.2. This is hardly surprising as this is the construction system that SIPS@CLAYS specialise in — they were one of the original Kingspan Tek project partners. One of the houses was double glazed, the other used imported Swedish triple glazing, and both had been fitted with mechanical ventilation with heat recovery (MVHR). Neither house had anything in the way of conventional space heating, but both had wood burning stoves and both had solar thermal panels on the roof.

And what were they like to live in? Had they been cold during our recent cold snaps? Were the residents togged up with woolly hats and scarves, regretting their decision to be so bold as to do away with space heating?

Joan Barker, the builder of the house near Beverley, was still in the process of finishing off the house. She and her husband had moved in about a week before my visit (when it was really cold) and she said that it had been a little chilly for the first two days right after the move, and she admitted to using a couple of 2kW convector heaters to get up to comfort. But since then, no extra heating at all: and the wood burner was only being lit in the evenings. I would have said that she was already one happy bunny, and felt vindicated by her decision to do away with radiators and/or underfloor heating.

In Accrington, David and Jane Hartley had been living in their home since the summer and had had longer to figure out how it was responding. They kept their multifuel Dunsley stove going throughout the winter months (using coal only at night to keep it going) and the MVHR system distributed the heat around the house quite effectively. The room temperatures varied between 14°C and 18°C — not warm by current central heating standards but they found it quite comfortable. Although the stove is located in the middle of the large central living area downstairs, they tended to spend much of their evenings in an upstairs lounge and they noticed that the temperatures were more even upstairs than downstairs, where two of the peripheral rooms were noticeably cooler than the main living area where the stove is. This may be an effect of the uneven distribution of heat via the MVHR ducting.

So have they done it? Are these no heat homes, or are they merely modern variations of houses that might have been built in Beverley and Accrington 100 years ago, heated by solid fuel fires? Are we simply using modern technology (fans and ducting) to shift heat around a house more effectively? These are all interesting questions which I am not sure I can provide a coherent answer to just yet. But in the absence of any genuine Passive Houses in the UK thus far, these SIPs homes stand out as being as close to the new paradigm as we are likely to get in the next few years (being super insulated, pretty airtight, and mechanically ventilated) and they do look to be providing comfortable living conditions with a minimal energy input, which is after all what this low energy thing is all about. I guess the success or failure of these schemes should ultimately be assessed by the size of their fuel bills and in neither instance had they been in occupation long enough to make a judgement on this.
Posted by Mark Brinkley