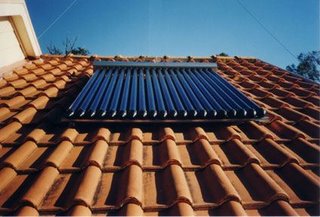 Leaving aside any green feelings you might have about saving the planet, the brutal economic reality is that roof-mounted hot water solar panels have not been a good investment. At a typical installed cost of between £2,000 and £3,000, and rather more than this for the more efficient evacuated tube systems (pictured), you would need to save £300 a year on your fuel bills to get a ten-year return, and this was never going to happen. The harsh reality has always been that your roof panels would be defunct before your investment could ever be repaid.

But, and it’s a big but, times change.

• 1. There are newly announced government grants, available in England & Wales, to reduce the installation costs of solar panels. It’s only £400 but it’s a start.

• 2. We are now living with much higher fuel charges, which increase the savings brought about by installing solar panels.

•3. We are using more hot water than ever. The more we use, the more useful solar panels become, for they are quite capable of producing bucket loads of hot water when the sun shines. In fact, during the summer months, they produce far more hot water than you could realistically use. In the winter, things are rather different, but even if you assume that solar panels only contribute meaningful supplies of hot water for six months of the year, the economic calculus is turning in their favour.

Roof mounted solar panels can supply you with an average of 300 litres of hot water each a day for maybe six months of the year, provided you have a big enough cylinder to store the hot water.

This assumes that you would actually use 300litres of hot water every day during the summer. It’s a lot but it’s more or less what our family of five consumes so it’s not inconceivable.

What this means is that for the first time there is a payback on solar panels that is shorter than their lifespan, generally agreed at between 20 and 25 years. It’s still above that magic ten-year payback period at which financiers tend to get interested but, in the case of oil-fired systems, it’s not that far off. It would take another 25% hike in oil prices to make solar panels a gilt-edged investment, without any grant aid. You’d still need to be a fairly big water consumer and you’d need to have your hot water storage optimised, so it wouldn’t suit every household for sure. But it still represents a major sea change for the solar panel industry. If you take a view that energy prices will, say, double within the next twenty years — and oil has trebled in the past six — then solar panels are already a very solid investment.

PS The payback time on installing photovoltaic panels — the ones which produce electricity, rather than hot water — is still way longer than their anticipated lifespan.
Posted by Mark Brinkley