Following on from the previous post, readers will be pleased to know that I got to the meeting on Saturday night and saw Jeremy Leggett and Tony Juniper in action. There were about 60 people there and there were more questions than could possibly be dealt with in the hour allocated to the debate. The questioning was very friendly and included the hoary old chestnut “Which is worse? The government or the big oil companies?” To which of course there is no answer except that Bush’s government and Exxon are the worst of a bad bunch. 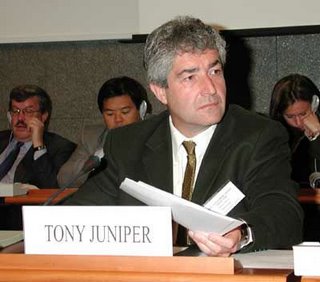 The question which I wanted to answer had to wait till afterwards. I asked Tony Juniper what would happen to all that CO2 we have released into the atmosphere. He understood the question but his answer was, I thought, just a tad waffly. He said he thought it would eventually be sequestered by the oceans and forests and that there was real hope that, if we could keep the carbon levels at under 550ppm, CO2 levels would start falling back towards the pre-industrial levels of 280ppm (they are currently around 400ppm). I must say my immediate feeling was one of relief: maybe we can crack this problem? But the nagging doubts soon returned. What if the levels don’t go down? And who the hell knows? Isn’t this yet more speculation? Are we just being fed a way out so we don’t all get existential and go top ourselves?

Wikipedia is good on carbon sequestration. It sort of happens naturally. The forests do it, as we all know, but the oceans do it as well. In fact, it speculates that plankton extract carbon to build their shells from CO2 and that, when they die, they drift to the ocean floor and gradually solidify to eventually become fossil fuels. But of course it’s a slow process. If, as has been speculated, we are burning through carbon at 400 times the rate it gets sequestered by the oceans, it’s going to take an awful long time to get our CO2 levels back to 280ppm. 108,000 years to be precise! Unless we can find a way of speeding it up. Now that is speculation.