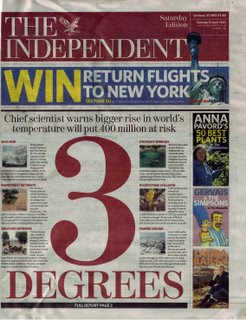 The Independent’s been at it again. Another front page global warming scare story (Sat April 15th) which slaps “3 degrees” across the middle underneath a strapline saying “Chief Scientist warns bigger rise in world’s temperature will put 400 million at risk.” And, quite subliminally, as if to let us know not to be too worried, this same front page also carries a 50mm deep blue advertising band, separating the title from the main story, offering us to “Win a Return Flight to New York – see page 50.” I love irony.

This is typical of the mixed messages coming out of our media and shows the thoroughly schizoid state we are getting ourselves into over global warming. If we are all going to roast in hell, we might as well enjoy the last few pleasurable moments we have left to us. “Anyone fancy going to Mauritius for Christmas?”

So what is it the Chief Scientist is saying? And, more to the point, who exactly is the “Chief Scientist” in the first place? Is he the science tsar? Or is his post altogether different? How does one grow up to become a Chief Scientist? Do we have a Chief Artist? And is there really a Ministry of Magic?

OK, OK, I can’t actually begin to answer any of these questions, but I can report what Sir David King (for he is it is who is the Chief Scientist) was reported to have said. It was only a few weeks ago that he told us that global warming is a bigger threat than terrorism. He may well be right, but it strikes me that this is the stuff of idle speculation – it has very little to do with science or scientific theory, which is what you might expect the Chief Scientist to be good at. It supposes that he knows what threat is posed by both global warming AND terrorism is able to make a logical comparison of the two. Which seems to me to be a bit far fetched. It could be that the threat from both is negligible and that bird flu actually turns out to be the really big nasty. But that’s just idle speculation on my part and I am not Chief Scientist. Not Chief Anything in fact, but are my speculations any less valid than those of the Chief Scientist? What powers has he gained in becoming Chief Scientist that make his speculations so much more valuable and insightful than anyone else’s? OK, I mean mine in particular. Maybe I should appoint myself Chief Critic. It is a skill, of sorts, and my family keep telling me I am all too good at it.

OK. Back to Sir David. What he has been saying this time around is that we aren’t going to hit two degrees temperature rise, which is what the politicians would like, but it will probably be nearer three. Hence the Indie’s helpful headline “3 degrees.” Now hold on a minute. There seems to be something I have missed here. We all now know that we are pumping huge amounts of CO2 out into the atmosphere. Every year we are adding about 1% to the total of what’s already floating around up in the sky. We all know the Earth is heating up, except (apparently) David Bellamy who thinks it’s gently cooling down. Well, you can’t please everyone and he’s very much not the Chief Scientist anymore. Sir David King (who is the man) is good on graphs showing just how much more CO2 is around now than there has been in the past 60,000 years. Take a peek at his PowerPoint presentation, given as the Greenpeace Business Lecture in 2004. I am convinced. I don’t need to be reminded once a week. I am a little bit frightened. I am also frightened of Muslim extremists and I fear for the safety of my eldest son who wants to drive around the country lanes like a boy racer, now that he is 17. You’ve got me frightened, but not yet frightened enough to lie awake at night worrying about it, or to stop flying, or buying imported salad from Waitrose.

What worries me here is that you can only go so far with the science bit and after that it’s off into the world of speculation. Like, will the world heat up by 2 degrees or 3 degrees? And, even more so, what on earth will be the effect of all this? It doesn’t help that much of this speculation is counter-intuitive. Many people speculate that far from getting hotter, the UK may actually get colder because the Gulf Stream will be obliterated by cold currents coming down from that patch of sea between Greenland and Canada. This doesn’t sound nice but it’s hardly apocalyptic. I am sure we would survive colder winters.

But there’s another, more fundamental problem I am having. All anyone is really talking about is slowing down the rate at which we release CO2 into the atmosphere. Not stopping it altogether, just slowing it down. Now, is the amount of CO2 up there going to decrease if we start slowing down our release rates? I don’t think so. It’s already at record levels. Even if we stopped tomorrow, it might be all too much for our atmosphere. People speculate about their being a tipping point after which the climate goes into freefall, but no one has a clue where or when that might be. At the moment, all we can really hope to do is to postpone the day when we finally bake to a crisp. If we follow George Bush, it will be 2100. If we follow Friends of the Earth it will be 2200. At least I think so. Despite having been a keen student of this issue since the 1970s, the truth is I have no idea.

Help is, however, at hand. On Saturday evening, if all goes to plan, I am going to see two real environmentalists in action. Jeremy Leggett, once Chief Scientist at Greenpeace (surely there can’t be two Chief Scientists? Or did the government steal the idea off Greenpeace?), now supremo of Solar Century, the PV cell people, and Tony Juniper, Executive Director of Friends of the Earth. They are “in conversation” as part of the Cambridge Word Fest, an event I was completely unaware of until yesterday. Hopefully at least one of them will be able to give a definitive answer to my question “Is all this CO2 just going to float around the atmosphere indefinitely?” and maybe even a supplementary “Should we be thinking of ways of returning all that CO2 back under the ground where it came from?” Will they have a convincing answer, or will it be more speculation?

Maybe we’ll find a way of making fossils rather than burning them? Maybe we are on the verge of a new technology, climate farming. Maybe in a hundred years time we will look back on this as the time we began to work out how to manage the atmosphere rather than sitting around like dinosaurs waiting for the extinction event to engulf us all. Or maybe we are all doomed. I really have no idea, but it’s fun to speculate.
Posted by Mark Brinkley