Global warming - it's OK to have doubts 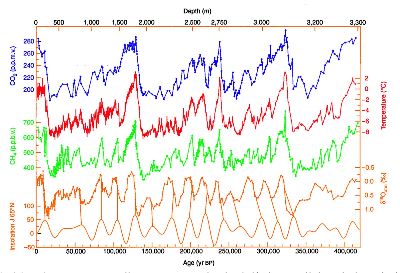 What’s this chart all about?

It’s a potted history of our climate over the past 400,000 years. I got it off Wikipedia. The data is drawn from the Vostok camp in Antarctica where they have drilled down into the 4,000 metre-depth ice field and have been able to determine CO2 levels, methane levels and temperature throughout the period through which this ice field has been accumulating. It’s a fairly recent project and the data now forms part of our key understanding of how the climate has been shaping up.

The present time is on the left hand side. As you move right, you go back in time. The right hand edge is 400,000 years ago.
• The blue line on top indicates the amount of CO2.
• The red line is the temperature.
• The green line is methane.
• The jagged brown line is oxygen.
• The smooth brown curves right at the bottom is nothing to do with the data found in the ice cores but is someone trying to explain the variations in that data with reference to the Earth’s orbiting patterns, known as the Milankovitch cylces. If you want to know more about this, then head off into Wikipedia. It’s only a hypothesis and, judging by the best-fit they have managed to produce here, not a particularly convincing one!

What we are looking at here are four long ice ages broken up by four all-too-brief warm periods, known as interglacials, represented by the peaks. Each cycle seems to last about 100,000 years, consisting of around 10,000 years rapid warming, followed by a 90,000 year cooling-off period. The temperature variations are quite large. The coldest part of the ice age is around 10°C cooler than the warmest part of the interglacials.

We are of course in an interglacial period right now. In fact, it’s a remarkably long interglacial. The previous three all had very sharp peaks, suggesting a really warm period lasting no more than a couple of millennia. We are about 10,000 years past the end of the last ice age, which makes this easily the longest warm period during this 400,000 year epoch. I don’t think this means the next ice age is imminent: rather it suggests that something different is happening this time around. Of course, it is tempting to speculate that the flowering of human civilisation required an extra long interglacial. We perhaps needed 10,000 ice-free years to invent the iPod and to introduce congestion charging in London.

It seems unlikely that we humans have brought about this lengthy interglacial by our own actions. For its first 5,000 years, we were fumbling around in the Stone Ages and would surely have had zero impact on the environment. But as we began to clear forests and start farming, it is conceivable that our presence began to have an effect. But surely nothing like the effect we are now having since we worked out how to keep ourselves warm and well-lit and to propel ourselves around at great speed by burning fossil fuels. Is it possible that we could be about to extend this interglacial yet further by significantly altering the atmosphere? That is the big question.

Throughout this 400,000 year period, the chart shows that CO2 levels have bobbled about between 200 and 280 ppm (parts per million). However, in the past 200 years, since we started burning fossil fuels in large quantities, the CO2 levels have risen very dramatically, from around 280 up to nearly 400 ppm, and they continue to rise at around 1% per annum. That really is off the top of the scale. Fortunately, global temperatures — the red line on the chart — haven’t kept up in tandem, otherwise we’d have seen an increase of 10°C by now. But worryingly, sometime in the 1960s, global temperatures did start to rise and the rate of increase is starting to rise as well. To date, the temperature rise is still quite modest, at around 0.7°C above the long-term average, but the trend is becoming more and more noticeable.

The problem here is that there is no way of determining that the one factor — increasing CO2 levels — is causing the other — increasing temperatures. There is data coming in from all over the world and most of it confirms that the world is heating up. There is the greenhouse theory which provides a neat explanation of why this should be happening. But there is no way of proving it. The increasing temperature trend is still comparatively new and comparatively modest and we simply don’t know enough to be able to predict where it is heading in the future. All we can do is keep collecting data: the warmer the Earth gets, the more convincing the theory of global warming becomes. But anyone can see that at the moment there are still too many unknowns to sweep away all doubts about the theory.

These doubts shouldn’t be underestimated. I want to show that it is OK to have doubts and to express them publicly without fear of being ridiculed. Having doubts doesn’t make you a ‘global warming denier.’ At least, I hope it doesn’t, otherwise I will be in trouble.

There are lots of possible reasons why we may have overestimated the effect of releasing CO2 into the atmosphere. One that stands out is the miniscule quantity of CO2 up in the atmosphere even after we have been burning fossil fuels for two centuries. The very reason climatologists refer to CO2 levels in Parts Per Million is because, if they express them as a percentage, it’s such a small figure that they risk getting decimal point errors. 400 ppm is in fact 0.04%. Put another way, oxygen, which makes up just over 20% of the Earth’s atmosphere, would come in at 209,000 ppm. CO2 really is just a tiny trace element in the atmosphere and even if we burned every available bit of fossil fuel we have, it’s unlikely that we would nudge CO2 levels much above 0.1% of the total. So it could well be that the effect of increasing CO2 levels could be very muted indeed and that we shouldn’t get too worried about it. On the other hand, the changes we are bringing to the atmosphere could bring about some very large and unpredictable alterations to the global climate. That of course is the fear.

We still probably have time to change our habits but it’s hard to see this happening without a fair bit more proof that we are cooking ourselves. In summary, I think it is quite possible — sensible even — to be both very worried about what we may be doing to the climate and yet to question the data coming in. In other words, to maintain a healthy scepticism.
Posted by Mark Brinkley