Our house is designed with a walk-in pantry. How very now, I hear you thinking. Only it’s never quite been the wonderful place I thought it might turn into. It’s not a spot the kids choose to hang out in on a Tuesday evening, or a venue to discuss village gossip with a neighbour. It’s just a plain old storeroom, stuck across the utility room at a somewhat annoying distance from the main kitchen area. You have to avoid dogs, washing and odd bits of hardware spread across your path to get into the pantry, so it’s a sort of inconvenient convenience store.

It is lit by a single bulb. No architectural lighting features here. There are no windows, just a breeze hole at the far end, so without the light being switched on it’s really a bit desperate in there. Being a family with three slobby boys, the light was of course always being left on, sometimes overnight. Now, as a paid up member of the grumpy-green tendency, you can imagine just how my blood pressure would head up off the scale when being confronted with a light left on overnight.

Three years ago, I hit on a plan. I pitched up an electrical wholesaler one day and bought a time-lag switch. Maybe you’ve seen them? Instead of flicking a switch on or off, you press a big button inwards, the light comes on and then slowly the button works itself back out to the off position and the light turns off when the contact is broken, after a time delay of a couple of minutes. The time delay is adjustable. They are dead easy to fit – the slip into a regular switch backplate with the same electrical screws. Great idea, but how would it go down?

I snuck in and did the job with the aid of a torch (there being no light available whilst I changed over). It took maybe three minutes. Then I sat back and waited for howls of protest from wife and/or sons. “What have you done to the bloody light switch, you twat” or some such family bonhomie. But the funny thing is the protest never came. I think they actually liked the light switch. Once the novelty of a push-in light switch had worn off, we grew to enjoy the way it worked. There is a somewhat pleasing, sensual quality to being able to push a light switch inwards. More biological than mechanical. Maybe it was to be a small green success story?

Well yes and no. About six months ago, the switch started sticking in the on position and on a couple of mornings I found the pantry light on and the push-in switch in a state of permanent depression. Now, far from being an energy saving device, it was in danger of becoming an energy waster because it’s not easy to turn the light off, if it doesn’t do it itself. You have to tug at the button and persuade it to start its outward journey. It misbehaved two, maybe three times and then it seemed to fix itself. Or so I thought. 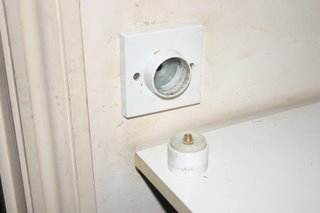 Then last week, I was rummaging round in the vegetable rack, just next to the switch, and accidentally knocked the switch with a bag of parsnips. The push button popped out of its socket, rolled across the shelf and came to rest on the floor. The light immediately went out, so I picked up the push-button and stuck it back in its hole, and pressed it in to bring the light back on. Voila! It wasn’t broken after all! Thinking how clever to get that fixed so easily, I got the onions I was after and went into the kitchen. Then, two minutes later, I heard a ping followed by the clattering sound of the push-button hitting the floor again.

The switch still works but every time it reaches the off position, it comes loose from its moorings and pings out across the shelf. I’m buggered if I can work out how to fix it. I put a wire basket underneath the switch to catch the push-button before it falls on the floor, but it’s not what I’d call an ideal solution.

So tonight, I went on line to the TLC website and ordered a replacement. They are called Time Lag Switches and they cost around £15. I wonder if the replacement will fare any better than the last one?
Posted by Mark Brinkley