Are reflective insulation foils all they are cracked up to be? Or are they are con trick?

It’s amazing that we still don’t have a definitive answer to this question, despite them having been around for 20 years or more. Most countries don’t accept the claims made by their manufacturers and refuse to let them be used as thermal insulation. But the UK has taken a more relaxed approach and has said that if the foils can be shown to a reputable independent body that they are as good as the traditional forms of insulation, then they will be acceptable for use on building sites across the land.

The problem for these foils is that when they are subjected to the standard method for testing insulation, known as the guarded hot box test, they don’t perform particularly well. They are not useless, it’s just that they can get to an equivalent to about 80mm of mineral wool and no more (doubling the thickness of these reflective foils has only a marginal effect on their efficacy) and that’s not enough to meet the current U-value standards. But in field trials, the foils can be shown to perform as well as 200mm of mineral wool or 120mm of polyiso board and, if these field trials are to be believed, then the foils are good enough to use as an alternative to mineral wool or the polyiso boards made by the likes of Kingspan and Celotex.

Now, the credibility of the foils in the UK has, to date, hinged on one field trial conducted by the main manufacturer, the French company Actis, and witnessed by Geoff Pitts of TRADA. Actis built two identical roof spaces, insulated one with 200mm of mineral wool, the other with their Tri-Iso Super 9 foil and measured how much energy was used to keep each roof at a constant temperature during a couple of winter months in the French Pyrenees. TRADA, who are an accredited third-party certifier of building products, were satisfied that the Actis product was as good as 200mm of mineral wool and, on this basis, Actis has been able to sell acres of Tri-Iso Super 9 to be laid inside the UK’s roofs. It’s particularly popular for roofs where its simple and quick to fit and it gets over the problem of there not being enough rafter depth to accommodate the traditional insulation boards for the foil-based product is only 20mm thick.

Manufacturers of traditional insulation have seen red and have attempted to rubbish the claims of Actis but to date, as far as I know, they have only ever repeated the guarded hot box test. No one has published the results of another comparison field test.

So it was with great interest that I received a letter last week from Charlie Duke, a house designer who lives in Devon, who was also troubled by the reflective foil debate and wanted to see for himself whether it really worked. He has run a series of tests over the winter measuring how long water will stay warm in a variety of insulated shells. The tests were carried out in his garden shed using very basic materials but shouldn’t be dismissed because of this. He wrote: 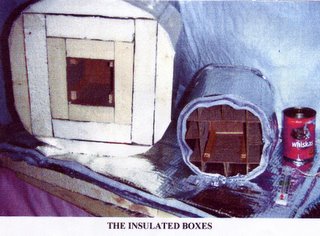 The temperature of 350ml of water inside two empty cat food tins was measured in half hour intervals. Each tin was enclosed with insulation with a claimed thermal resistance of 5 (equivalent to a U value of 0.2). As the reflective foil requires a 25mm air gap on the heated side, a 100x100x130mm box of 2mm MDF was made with fins to maintain the air gap. To make things as equal as possible another box (without fins) was set inside the 120mm of polyiso insulation. All joints were taped to prevent air loss. The water filled tins were placed on a layer of 70mm polyurethane foam.

The results were remarkable. The heat loss performance from the two tins showed that whilst 120mm of polyiso board consistently beat one 20mm layer of Actis Tri-Iso Super 9 foil, it was never by more than short head. And that the effect of using a double layer of Actis actually gave a marginally better performance than the 120mm of polyiso. Charlie Duke also tested two layers of Actis, with 25mm air gap between them: in theory this should be better than two layers touching each other but it didn’t show any appreciable difference.

Now just how much credence should be paid to Charlie Duke’s tests I am not sure. He makes no claims to being a hot-shot physicist and the nature of his tests, using Whiskas cat food tins for his water container, is probably a bit too Wallace & Gromit for some. But full marks to him for carrying out these tests and contributing to the debate. I spoke to him on the phone on Friday and was convinced that this is a genuine attempt to understand the complex science of heat loss and to make a reasoned comparison of two different systems: i.e. he is not being set-up by Actis. I hope that others are tempted to follow in Charlie Duke’s footsteps and try similar experiments themselves. Indeed, I am very tempted to try and replicate it here in Weston Colville but I suspect it may have to wait for another winter.
Posted by Mark Brinkley