From Poundbury to Sherfield Park: another utopian dream bites the dust 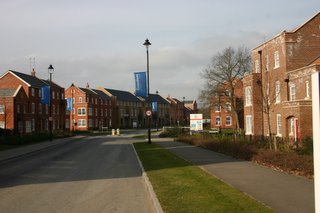 Last week I drove up the A33 between Basingstoke and Reading and ran into a nightmare vision of the future. There I was, driving along a country A road, minding my own business and I pitched up at a new roundabout. Could it be a supermarket? Or a science park? No, it was a new housing estate called Sherfield Park and it has to be the most pretentious, most pointless development I have ever seen. Frankly, an enormous Tesco with fake plastic columns would look a lot more authentic than Sherfield Park.

The picture shows the three-storey terraced scheme straddling the spine road into the development. It looks like it should be in London, but it’s not, it’s right in the heart of the Hampshire countryside. Why on earth are they building Georgian townhouse terraces here?

The answer lies with the current planning obsession with density, known by the acronym PPG3, which is seen as the best way of developing new homes without upsetting the natives. It all started with Prince Charles’ Poundbury development in Dorset. Poundbury was reactionary. Reactionary in style; it was a throw back to old vernacular forms of English housebuilding. But also reactionary in its layout, in that it cocked a snook at the car-led, cul-de-sac designs which have, until recently, characterized our new housing estates. Poundbury sought to create much more than a dormitory: it aimed at building a functioning community, with shops, pubs and halls where people could meet and socialise.

There is a little magic about Poundbury. It works. People like it, it looks good, and influential people go and visit it to see what all the fuss is about. Even avowed modernists who loathe Prince Charles’ olde-worlde designs have to admit that Poundbury is a damn good development. It was started in 1993 — it is yet to be finished — and, during the 12 years of its existence, its influence has spread far and wide. It became the model for PPG3, which came into force six years ago. No more cul-de-sacs, no more detached houses surrounded by decent sized gardens, no more wasteful two-storey homes. And only one and a half parking spaces per house.

But just as the New Towns movement turned into a lame excuse to build some really crap towns, so Poundbury and PPG3 have become diktats used to inspire some really shocking new developments. Such is the obsession with density and sustainability that the houses are cramped, the gardens miniscule and there is nowhere to park the car. The theory being that, of course, being communities, not mere housing estates, people will be walking to work or maybe popping off on their bikes. Or catching the bus that comes past once every ten minutes. A likely story.

PPG3 seems to have replaced one sterile form of development with another. What we are now getting is these strange looking urban extensions like Sherfield Park. Except that this one is five miles out of Basingstoke, and is surrounded by green fields. There is nothing remotely urban about this site and making it look like a town looks like some sick architectural joke. Sherfield Park, like dozens of similar examples dotted around the country, is a just a very ordinary housing estate that just happens to look like a dumbed-down version of Poundbury.

I gather from a nearby resident that the place is already famous for its parking disputes: in the absence of the community hall for years to come, at least this is one way of getting the neighbours together!
Posted by Mark Brinkley