Sandra Bullock screwed by her builders 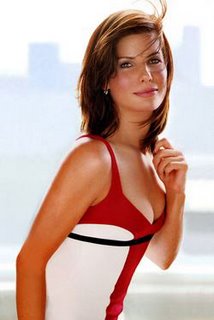 In the great tradition of tabloid-style headlines, not to mention an excuse to place a picture of a beautiful woman on the blog, here is the story of Sandra Bullock’s abortive attempts at building a house. It was featured in the Sunday Times on Feb 5th but, of course, I missed it and had to rely on The Week to point it out to me a week later.

Being Hollywood reportage, one really has no idea how much of this story is true, but it makes a welcome change to my usual diet of screed costs, heat pumps and me bleating-off, grumpy-old-man style, about the state of contemporary Britain.

John Harlow is the journalist. This was his piece taken from Times Online

IN an explosive ending worthy of Hollywood, Sandra Bullock, the star of Miss Congeniality, is preparing to demolish her £4m “dream home” in Texas in the culmination of a long wrangle with the builders.
Bullock spent years designing the lakeside mansion in Austin, complete with towers and spires, a spa, library and cinema. But two nights after moving in she moved out again, claiming that the house was a potential deathtrap with a leaking roof, toxic mould, unsafe fireplaces, faulty wiring and crumbling walls.


Bullock sued her builders, winning £3.9m in damages and penalties. She has not yet been able to collect the money to carry out repairs and has opted instead for a cheaper solution: tearing the house down and starting again.

“She’s going to blow it up, demolish it,” said a spokesman for the actress. “She will be pressing the button, or whatever you do to make the wrecking ball go — probably this coming week.”

The saga has already had one dramatic result: following last spring’s trial, the Texan authorities introduced a new law which has become known as the “Bullock Warranty”, obliging builders to guarantee the quality of their work.

Critics say the cost of litigation is such that victims will have to be as rich as Bullock, who earns up to £10m a film, to enforce such an agreement. They nevertheless acknowledge it as a victory in the never-ending struggle between home-owners and shoddy workers.

Bullock has not been left homeless during the eight-year dispute. The 41-year-old actress has another home in Austin as well as flats in Los Angeles and New York and, despite an intense allergy to horses, a property in the “urban cowboy” town of Jackson Hole, Wyoming.

She nevertheless considers Austin her “little piece of blue heaven” where she feels free to go out “dressed like a pig”.
The city is known for alternative lifestyles reflected in a popular T-shirt slogan, “Keep Austin weird”. Her estate on River Hills Road is on Lake Austin, opposite a park where an annual music festival is held.

Bullock moved to Austin after she first tasted fame in the 1994 thriller Speed. Advised by John Bullock, her father and manager, she planned a £1m, 5,000 sq ft house on the shore. But Benny Daneshjou, then the most fashionable builder in Austin, said he could double the size for an extra £300,000.

She accepted Daneshjou’s offer but, as she later told the court, the bills starting flowing in and soon reached £4m — at one point she was sinking £500,000 a month into the “money pit”. She ordered a halt to the construction in 2000, when she realised that she was losing control of the project.

A year later Daneshjou sued her over unpaid bills, so she counter-sued for fraud. The dispute ended in court last spring. During the eight-week trial Bullock cried and cracked jokes at her lawyers’ expense — “You guys are pricey. It’s going to be a good Christmas for you, isn’t it?”— but maintained that she was suing the builder out of principle.

Her lawyers described the mansion as the “house of broken dreams”. The damages that Bullock won were the largest awarded in a private housing dispute in Texas. But she is still pursuing the builder through the courts, claiming that he has “hidden” many assets by signing them over to his wife.

Despite having told newspapers that she was bored with acting, Bullock has returned to work, partly to pay for a new house. She has just finished shooting her comeback film, a supernatural romance with Keanu Reeves, her co-star in Speed.
Bullock is said to be amused by the film’s title: it is called The Lake House.
Posted by Mark Brinkley