Gas prices have been in the news today. Again. They are set to rise. Again.

But when? And by how much? If ever there was a smoke and mirrors story, it’s this. 15%, 20%, some say prices need to rise by 25%. But just this morning, Patrick Heren, an energy analyst, appeared on Wake Up to Money at 5.30 a.m. saying he thought it was just a short-term spike and that prices would fall in 2007.

As someone who makes recommendations about which heating systems to choose for new houses, based on future running costs, it’s all rather confusing. For a start, I like to price my fuel in kilowatt-hours (kWh): it is how it is sold to the consumer by the gas and the electricity companies, so it’s an easy unit for comparison sake. For years, mains gas cost around 1.5p per kWh: it has crept up to near 1.8p recently, but if you want to work out where it will be after the next round of price rises, you are left floundering. Instead the media resort to fuel bills for the average house. Or you get a graph of the wholesale gas price in pence per therm. What is a therm, for chrissake? Wikipedia to the rescue.

A therm is the energy equivalent of burning 100 cubic feet of natural gas at standard temperature and pressure. It’s undeniably imperial. It’s equivalent to 100,000 BTU (British Thermal Units). And somewhere in the dark recesses of the Housebuilder’s Bible, (actually p 390 of the current edition), I can extract the fact that there are 3,410 BTU in every kWh. I can’t remember how I came to know that fact, but it’s been in every edition of my book and that’s now an institution older than Wikipedia so it must be right. So by dividing 100,000 by 3,410, we should arrive at the number of kWh in a therm. The answer is 29.3. 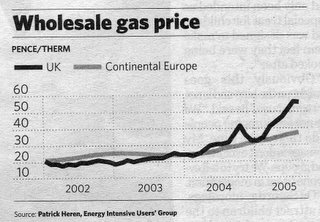 In the short term, gas supplies in the UK are being squeezed, hence the imminent price rises. The North Sea still supplies 95% of our gas but getting hold of the extra 5% is beset with problems because our European neighbours don’t want to part with it and we haven’t got the infrastructure to get it direct from Russia. That is why our prices are way higher than anywhere else. At the moment.

But what does the future hold? At some point in the next three months, I have to go to press with a graph showing relative costs of using different forms of heating. At the moment, the market is in a state of flux. Where do I guess gas prices will be over the next two or three years? 2p or 3p per kWh? And what of electricity? Currently hovering around 7p per kWh, they seem set to go higher. But to where? 10p? 12p?

And to an old greenie like me, I can’t help feeling that the increasing price of fuel is actually a good news item because it will, at last, stop us using it so freely. Strange that the Independent, the greenest of our national dailies, chooses to headline its story with the poor and the vulnerable will die if they can no longer afford to heat their homes. They can’t have it both ways! Last summer the same people were dieing because global warming was making them too hot. Best not to be poor or vulnerable. Or to make yourself too scared by reading the Indie.
Posted by Mark Brinkley