A webpage for every house? 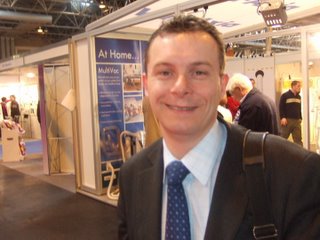 The concept of a logbook for houses isn’t new. “It happens with cars. Why not houses?” goes the well-worn mantra. But no one has ever managed to get the idea off the ground. Stuart Young (pictured here) is going to have a go, with a new web-based business called Property Log Book . Has he got a cat in hell’s chance? Charging £30 a year to keep your documents on his server?

Well yes, he might just be onto a winner. Thanks to changes in the rules about how we buy and sell houses and how work on them is to be certified, it looks as though his timing is spot on.

So what are the changes which are prompting the need for logbooks at last? Firstly, the buildings regs are slowly moving towards a system whereby work can be deemed to satisfy if it has been carried out by competent people, rather than having to be passed by independent building inspectors, which has been the routine since Victorian times. At the moment, electrical work, window replacement, boiler fitting and work on unvented hot water cylinders can, and usually is, said to meet building regs if the tradesman carrying out the work is appropriately qualified. Self-certification is the phrase being used and self-certification is a trend that looks like it is here to stay. We can probably expect to see general builders offering self-certification for entire jobs sometime in the next few years, especially if that certification is covered by an insurance-backed guarantee. If this comes to pass, the role of the traditional building inspector will be greatly reduced. Already, building inspectors are complaining that the nature of their workload is changing and that much of their time is now spent digging out building reg approvals to facilitate house sales.

Which brings us onto the other major change afoot. The imminent introduction of the sellers’ packs, or Home Information Packs. An awful lot of the information required to sell a house is this run of the mill search through the archives to see if the house has actually got planning permission for that extension or if the loft conversion did actually get building regs approval. Why should the local council have to file away all this information? And why should the local council have to retrieve it when the principle beneficiary is the homeowner who, arguably, should have kept it all along. It is likely that the Home Information Packs may cost several hundred pounds to put together; if the house had a complete logbook, most of the queries raised for the homeowners pack would be sorted with just the click of a mouse.

Or that is the hope of Property Log Book, who are selling server space for around £30 a year. They reckon that if you stay in a house less than ten years (and most people move every seven years), this annual investment will pay for itself by reducing the fees for putting together Home Information Packs.

So how would it all work? Say you had some windows replaced. At the moment, you are can have the work passed by the local building inspector or get it done by a FENSA-registered installer. If it’s a FENSA firm, then they are required to issue a notification to building control to say that the work carried out met the current building regs standards. They should also give you a similar notification. What you would then do is send the ticket off to Property Log Book who would enter it into your database for easy retrieval. Every house registered with them would have its own web page which can be password accessed by the homeowner. When the time comes to sell the house, the information can be presented instantly to the purchasers or their solicitors.

It’s a particularly good idea for the new homes market. The logbook webpage is capable of holding all the plans and specifications for the new house, together with warranty details, and instructions for running all the systems in the house. Anyone wanting to work on the house can have instant access to this information. It also forms a useful record of tradesmen who have worked on the house, possibly with comments from the homeowner: this sort of information would be invaluable to a new purchaser.

No doubt there will be squeals from the grumps that it’s yet another example of Big Brother’s tentacles round your testicles, but I reckon it’s an idea whose time has come. Only one thing for it. I am going to sign up and test the service.
Posted by Mark Brinkley