The loft conversion is a thoroughly modern phenomenon. They started to appear in the 1970s and have spread across the UK from the expensive areas towards the cheaper ones. You see them most often where land prices are highest, which is where people are looking to make their footprints sweat a bit. In an era of low rates of house replacement rates and with 3% stamp duty cutting in on house sales above £250,000, it’s a wonder there aren’t more loft conversions being carried out.

One of the factors stopping lofts being converted is the prevalence of fink roof trusses. This little innovation was widely taken up in the 1960s by British housebuilders because it was cheaper and quicker than building roofs on site in the time-honoured method. A fink truss roof is not easily converted because the integrity of the roof depends on the truss loadings being left in tact and the loadings typically run from wallplate to wallplate across the house. I would guess that around 98% of individual house roofs built between 1970 and 2000 used fink trusses so there must be four or five million homes in the UK (out of a total of 25 million) which have these roofs. They are not impossible to convert into living space but they do present difficulties that are enough to put off the average builder.

The demand for loft conversions has led to one of two innovative businesses setting up which specialise in turning fink roof truss roofs into habitable rooms. One such is Ripon-based Truss Loft which undertakes around 150 conversions a year across the whole country. They thread steel through the loft from gable to gable and build up a floor and roof support off these steels. 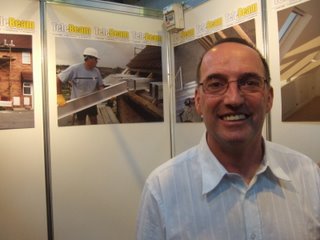 At the HomeBuilding & Renovating show at the NEC show last weekend, there was another business looking to crack this lucrative market. Telebeam was started by Digby Rowsell (pictured), a house designer from Wiltshire, who had oft pondered the madness of building all these fink trussed roofs. He hit on the idea of using a telescopic aluminium beam, which could be thread through the roofspace from side to side, thus creating a new floor strong, enough both to support activity in the loftspace and the weight of the roof above it. Rowsell has worked through the prototype stages and had the beams passed by LABC, the Local Authority Building Control body that should mean that it is acceptable to all local authorities.

The cost is around £300 a beam: each truss requires a beam either side, so effectively this means £600 per truss. Trusses conventionally sit 600mm apart, so an 8m long roof would have 13 trusses and the cost of supplying 26 Telebeams would be just under £8,000 (+VAT). That sounds like a lot for a loft conversion but bear in mind that most loft floors require strengthening in any event and that this cost is in for nothing with Telebeam. It’s also not far removed from the extra cost charged by companies like TrussLoft for their services: there is simply no cheap way of converting fink-trussed roofs.
Posted by Mark Brinkley