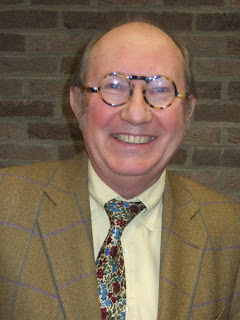 Monday evening spent at the Cambridge Forum for the Construction Industry, and an event called Assisted Selfbuild (an alternative approach to housing provision). Of the three speakers, the one that caught my ear was Dickon Robinson, pictured here, well-known as the one-time Development Director of the Peabody Trust and therefore someone very involved in commissioning various MMC projects over the past decade or so. He is still heavily involved in the politics of housing through various bodies such as CABE.

What caught my ear in particular was one or two questions he posed. He didn't exactly say that the government's housing projections were a load of crap, but he did raise the issue of whether it was really such a wonderful idea for more and more of us to be living alone. "Living in single person households is inherently unsustainable" is one quite I wrote down. Another is "It may be that we already have enough homes." Finally: "Let's extend existing homes rather than building such small new ones." This was backed up by some stats: the UK now builds the smallest new homes in Europe (I guess many of you already knew that). But more. 100 years ago, our space standards were much better, but much of this old housing stock is now occupied by empty nesters and the occupation density is very low. But no one in the housing debate has talked about occupation density; instead the talk — and policy — has all been around housing density. They are not the same thing. I think it's a point well made.

Robinson was of the opinion that everyone who extended or renovated an existing house should be described as a selfbuilder, thus making the definition far wider than is normally accepted. And he went on to say that one of the reasons for the enduring popularity of older houses was that they were inherently adaptable and extensible, whereas today's offerings are very difficult to alter. He also made some interesting observations about social housing, particularly so as he has been so intimately involved in it at Peabody. He recalled that the original council houses, built in the 20s and 30s, were only available to people who had jobs, and that they were regularly inspected by council officials to see that they were being properly cared for — these selection criteria were relaxed after WW2, when many families had to be rehoused. He then suggested that for some, social housing had become "deeply dis-empowering" because tenure was secure, rents were low and thus it "stopped you having to get up in the morning." He also spoke out against pepper-potting, the current practice of mixing affordable with private housing, the logic being to avoid building ghettos. He thought it hadn't been a great success and that, by and large, people were happier living with neighbours of similar social standing. Interesting thoughts, running counter to the prevailing mainstream for sure. The last of the great paternalists? Or a breath of fresh air in a sea of political correctness? You decide.
Posted by Mark Brinkley