In April 2015, the CDM (Construction Design and Management) Regulations were expanded to include selfbuild for the first time. This appears to be in response to a European Directive that all building works should be covered by Health and Safety legislation, regardless of the way the sites were run, or of their scale.  The UK government risked being fined if it didn't implement the Directive (which has been around since 1992) in the way the EU thought appropriate.

So now almost all building activity comes under the ambit of CDM. The only exclusion is if the work is truly DIY, with no paid contractors at all. But to counter the widening of CDM, the resultant duties have been made a lot simpler and easier to achieve.

The CDM regs began life in 1995 and received a major upgrade in 2007. The earlier versions of CDM specifically excluded domestic clients but made substantial administrative demands on small builders running commercial sites. There was a key appointment of a CDM co-ordinator who had to take on responsibility for developing a Health and Safety file and ensuring that everybody involved on the job had some level of competence. The 2015 regs not only do away with this Co-ordinator role but make no mention at all of competence. Maybe competence was just too much to police. Maybe it was dropped because it was needlessly bureaucratic. But it's gone, and with it much of the purpose of CDM.

What's left? The Health and Safety file is still required but the guidance offered by the Health and Safety Executive is to download an App called CDM Wizard (available only on Android and IoS, which shows just where this is being pitched). Fill it out — mostly a series of checkboxes, about 15 minutes work — and "This is the Construction Phase Plan of your job as required under CDM 2015." Sorted.

You still have to notify large jobs to the HSE before you start but very few selfbuilds will be of sufficient size to have to warrant a notification. The threshold is that the job lasts longer than 30 working days and has more than 20 workers working simultaneously at any point in the project,  or the job as a whole exceeds 500 person days. Most selfbuilds should take rather less time.

It is also noticeable that the 2007 CDM regs guidance was a much longer document and was frankly over-complicated. It didn't include any information about health and safety risks, merely their management. In contrast, nearly half of the 90-page CDM 2015 guidance concerns itself with managing specific risks you are likely to meet on site.

For instance, if you are involved in demolition, you are required to plan and carry it out in such a manner as to prevent danger or, where it is not practicable to prevent it, to reduce danger to as low a level as is reasonably practicable. It's hardly going to say anything else, is it? You are also required to have a written record of your plans before commencing, but if you have filled out the CDM Wizard, you will be there already.

So what exactly is required of today's selfbuilder, now that almost all building work comes under CDM?  The guidance includes a flowchart (p86) which is about as clear as mud, as it bandies around terms like DIY and contractor without defining them. But if you work your way through this, you will find that you are more than likely deemed to be a domestic client and that you really don't have to do anything because the people working for you, be they designers, main contractors or individual tradesmen, become responsible for CDM by default, unless you want someone in particular to act as the CDM guy.

I don't happen to believe that CDM 2015 is particularly taxing on designers and contractors either. Designers are required to design in ways to minimise risk to workers and to follow-on maintenance, which isn't a bad idea and hardly needs a set of regulations to tell us as much. And contractors have to produce a health and safety file, which it appears can be done for free via the CDM Wizard. For large complex jobs, CDM may come to have a significant role to play. But at the domestic client scale, it's now not far short of being a simple check-box exercise.

Critically, CDM 2015 has replaced the competence tests with something approaching self-certification. If you judge yourself to be competent, than you pretty much are. For the past twenty years, lots of people have made a few quid by acting as professional CDM co-ordinators, often charging a four figure sum for the privilege. So whilst CDM now applies in the domestic building arena for the first time, it's going to be hard for professionals to justify charging such sums for "managing" things that designers and builders should be doing as a matter of course.


Posted by Mark Brinkley No comments:

In the post war years, we had a housing problem. A shortage even. Lots of people had been bombed out in the war and it was often cheaper to build new neighbourhoods than it was to repair the bomb damage. The governments of the day weren’t hamstrung by self-imposed borrowing constraints so they geared up to the hilt and embarked on a council house building programme the like of which hadn’t been done before and the like of which hasn’t been done since. Britain went a-housebuilding.

In 1965, which was the peak year for all this, we built 350,000 new homes of which about 40% were council houses, the rest being homes for the private market. In recent years, we have been building a total of just over 100,000 new homes a year (and almost no council houses).

Some look back on these as the golden age of housebuilding. It certainly was in terms of volume, but what was it that they were building back then? Was it any good? Most people agreed back then that the homes we were building were rather better than the ones people had been used to, which were routinely referred to as slums, but many of the slum houses which survived the clearance programmes have been “improved” and are now the bijou middle class residences worth over a million pounds a pop. Very little built in the 50s and 60s is now worth more than the land it stands on.

Britain’s post-war housing boom concentrated on results: it was quick and it was cheap but, by and large, it wasn’t really any good. Some council estates have stood the test of time but many descended into virtually unliveable sink estates, or “cities in the sky” where pimps and drug pushers ruled the roost. These days, it’s buildings from the 50s and 60s which are being demolished. Everything built before the war is tending to be lovingly restored.

Is there a lesson to be learned today? We are being exhorted to “build more homes” and housebuilders are being castigated because they are building so little when demand is so high. But are today’s new builds going to stand the test of time? And if we manage to up the numbers we build, will the standards drop?
Posted by Mark Brinkley 3 comments:

Passivhaus: the shape of things to come

Passivhaus aficionados like to make the point that Passivhaus construction doesn’t have to cost any more than “normal” construction. This seems counter-intuitive because the Passivhaus standard demands certain rather expensive features, such as triple-glazed windows, mechanical ventilation with heat recovery and more insulation than you can imagine fitted into places you’d never dreamed of. How can that not cost more to build?

The argument seems to go like this. You learn to work the Passivhaus way and each project you do gets relatively easier and quicker and less expensive. You also learn to design in ways that make it easier to build a Passivhaus and, bit by bit, you close the gap between “normal” build costs and Passivhaus.  Plus there is the added bonus of being able to do without a space heating system or at least a large space heating system, which saves a bit. The argument goes that if all houses were built to Passivhaus standard, within a couple of years the cost premium would vanish.

But there is a problem with this argument. The physics of heat loss dictate that, for efficiency’s sake, you need to maximise the heated volume and minimise the area of the envelope enclosing it. The heated volume determines what heat you have to deliver and the envelope surrounding it determines how much of that heat you lose. Getting the form right is one of the key determinants of effective Passivhaus design, yet is something that isn’t made explicit. 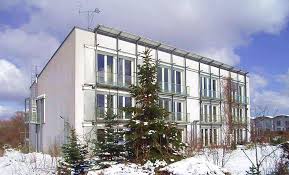 The most energy efficient shape for a building is a cylinder (it’s why Thermos flasks are shaped that way) but this is impractical to both build and live in. The most sensible conventional shape is a square box, three storeys high. Take a look at the original Darmstadt Passivhaus (pictured) built by Wolfgang Feist. Guess what? It’s essentially a three-storey square box, albeit in a terrace of four — terraces also work well because of the shared party walls. Very efficient form.

Changing a square box into a rectangular box has a small detrimental effect which gets more extreme as you add to the length and shorten the width. Reducing the structure to two-storeys also decreases efficiency a little, but neither of these two measures make a substantial difference.
But certain shapes get severely penalised by this remorseless geometric logic and none more so than single-storey house or extension. Single-storey-anything blows the ratio out of the water as the envelope needed to encase a single-storey structure is usually 30% larger than it is on a two- or three-storey dwelling of the same floor area and therefore the heat loss will be 30% greater. Just because of the shape. You could still build a Passivhaus bungalow but it would require far more insulation, and it would be much more expensive to construct. Consequently, you don’t see many (any?) single-storey Passivhauses.

So when you hear that a Passivhaus costs no more to build than a conventional house, bear this in mind. It may be true, provided you keep the design within certain tight parameters. To put it another way, the Passivhaus standard is either restrictive in what you sensibly can do, or costly to build if you want something that isn’t a plain box-shape.


To be fair, this same rule applies to the building costs of shells generally, not just Passivhaus. But because Passivhaus places so much emphasis on constructing a highly-insulated and airtight shell, it exaggerates the difference.
Posted by Mark Brinkley 5 comments: