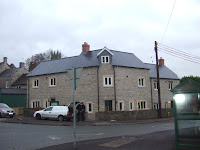 On the way back from the Homebuilding & Renovating show, I pop into a development of near Passive Houses in Chewton Mendip. There I meet the project manager Arthur Bland who shows me around the terrace of three houses, which have been commissioned by the Waldegrave estate and are going to be rented out on completion.

It turns out that this project has been driven by Arthur and his interest in low energy housing and Arthur is a big thermal mass fan. He chose to work with Logix, one of our more innovative ICF businesses, and he assembled a crew to work with him. He particularly liked Logix because their formwork is manufactured in the South-west and therefore if he needed something extra he wouldn’t have to wait six weeks for it to arrive from overseas. “I went on their training course, I went and visited two sites and then I just got going with it,” he said. “I picked up local builders to work with me; some were brilliant at it, others couldn’t get their heads around it at all.” 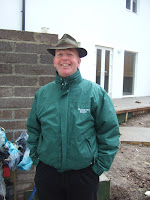 There were problems with the site. For a start, building control had identified a radon issue, which had to be managed. Arthur chose to use Eco Slab which, he said, was a brilliant solution, very easy to use and no mechanical handling required and, because it gives a ventilated sub-slab, all it needed was a gas barrier installed above to meet the requirements. Arthur also went for a poured Quad Lock intermediate floor, specifically to increase thermal mass — there is a hell of a lot of concrete in these homes. All around, the fabric is designed to have U values equivalent to Passivhaus standards, with extra insulation added where the proprietary systems didn’t quite get there. 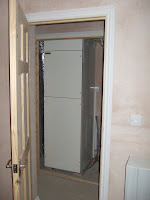 I had been told that these were another example of no heat homes, but it transpired that this wasn’t really true. What they did each have in their airing cupboards was £6,000 worth of Genvex Combi, a bit of kit I hadn’t come across before. This machine is a hybrid between a mechanical ventilation unit with heat recovery (MVHR), and an air source heat pump (ASHP), which also supplies 185litres of domestic hot water. It’s a beast, but it’s a quiet beast. One of the oft-heard criticisms of ASHP is that it is noisy, but these units ran with a barely discernable hum at the standard setting. Even on full blast setting, it made less noise than a gas boiler.

It’s a neat idea. On the other hand, it’s electric heating, which doesn’t sound too great an idea. But to be fair, this is also pretty close to the standard set up in a German Passivhaus, where they usually have something called a post-heater added to the MVHR system. Arthur said that without the unit on, the houses were settling at an internal temperature of around 12°C (it’s been fairly chilly recently), but when I visited they were holding a temperature of 17°C. None were yet occupied.

What I don’t yet know is how much energy these machines are using, though Arthur promises to let me know when he has some figures.
Posted by Mark Brinkley 1 comment: The talk was put on by the AECB, who also used the spot to promote their CarbonLite standard which is closely based on PassivHaus principles. What wasn’t explained was why the AECB should be supporting a different standard. Perhaps it will all become clearer to me in time.
Posted by Mark Brinkley 10 comments:

Remember the 3 million new homes that were needed by 2020? It wasn’t so long ago that this target was being spoken about seriously. Well, today a study by AA Insurance has found that a) 70% of UK homeowners have never had a lodger, but b) that 20% of these are now considering it. At least I think that’s what the figures mean. Let’s assume this is so.

There are around 25 million homes in the UK. So 70% of this is 17 million, give or take. Now if 20% of these 17 million (that’s 3.5million) are now actively thinking of taking a lodger, that will create 3.5million new bedrooms. That’s probably not far short of the number of bedrooms built in creating 3 million homes, as around 90% of these were envisaged as being rabbit-hutch style singleton flats.

So the credit crunch appears to have solved the housing shortage already, without so much as a brick having been laid. And all within 12 months.
Posted by Mark Brinkley 6 comments: 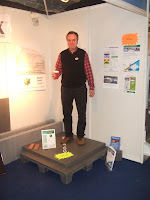 This is me at the Harrogate Homebuilding & Renovating show standing on an Eco Slab.

What is an Eco Slab? Well, I hadn’t seen one before but the fact that it was being demonstrated on the stand of Logix, one of our best known ICF suppliers, gives you a clue. Because what ICFs are to walls (i.e polystyrene moulds), Eco Slabs are to floors.

• You level the hardcore base
• You cover the floor with 1m square eco slabs, which have little polystrene legs
• You then pour a re-inforced concrete slab. The thicker the concrete, the wider the achievable span.

Will it catch on? I’m not sure. What you end up with is a hybrid which is not quite a solid slab (because there is air beneath the eco slab) and yet not quite a suspended floor (because the legs of the eco slabs rest on the ground). Does it require ventilation, as a suspended floor would? Not sure. And if not, then why not just build a solid slab? Off to the website to find out more but the website just shows up as a blank page in all my browsers, which doesn’t inspire confidence in the company behind it.

But it certainly supports a 15 stone blogger, and his Costa Coffee latte.
Posted by Mark Brinkley 6 comments: 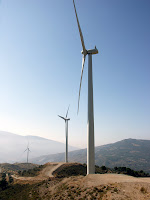 Meanwhile, here is an image of part of a wind farm I came across in Lanjaron in Spain two weeks ago. It’s located on the edge of the Sierra Nevada, easily visible on the road between Granada and the Med. Anyone who says a windfarm is an eyesore ought to go view this one: it is simply stunning. The road into Lanjaron weaves its way around numerous hairpins and it zigzags around several of the giant turbines. At one point you appear to be travelling through the blades themselves: they seem unbelievably close and powerful. For a brief moment, you can almost dream that the future may be benign afterall.
Posted by Mark Brinkley 1 comment:

I keep coming across this table on the Times website and then it keeps disappearing from view. Today I spotted it again on its Money Central site, so I thought I’d grab it and blog it, so that at least I can find it again when I next want to refer to it.


It’s both very funny and very depressing — maybe a sign of the times. It suggests that there is no point bothering doing anything ever, as all it does is waste money. Just clean everything and keep the surfaces painted.

Can things really be that bad? Where do these figures come from? It seems the research was carried out by the Abbey and it was widely quoted during the summer by a variety of media — try keying abbey research home improvements into your search engine — but I can find nothing on any Abbey site. If anybody can point me at the original document, I’d appreciate it.
Posted by Mark Brinkley No comments: