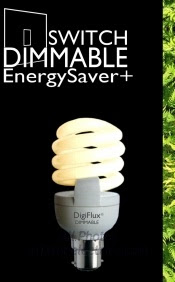 One word of caution. Varilight make a version of this lamp that is designed to work with dimmer switches, as well as having both formats available in bayonet or screw-fit. You have to read the website quite carefully so as you are sure which one you are buying. The one I have been testing is known as the YCA20S-B22 - Varilight Switch Dimmable energy saving lamp, Compact Fluorescent Lamp, with Bayonet Fitting, whereas the Dimmer Dimmable ones are known as the YCA20D-B22 - Varilight The NEW Varilight Dimmer Dimmable Energy Saving Lamp with Bayonet Fitting. Not exactly user friendly, is it? And the website isn’t the most elegantly designed beast you will ever come across either, so you may end up feeling that you are not quite sure what it is you are buying.
Posted by Mark Brinkley