I found this piece fascinating. In the late 1970s, Salford Council hit upon the idea of building some low energy houses. They weren't the only ones. We did things like that in the 1970s. They were duly monitored for a couple of years, broadly found to work just fine, and then quietly forgotten about for the next 30 years.

Then a couple of years ago, Salford University cobbled together some money to undertake a follow up study. They had trouble identifying the 250-odd homes as no one had kept any records, but they tracked enough down to make a decent fist of it. The houses followed the high thermal mass cocooned in a 200mm shell of insulation design, the sort of thing that isn't going to crumble away anytime soon, and were built for about 8% more than the standard prevailing at the time.

What they have found is that the space heating performance of these homes remains spot on. In fact, it actually beats the figures for the 2010 building regs, and is probably about the same as the level set by the proposed 2016 "zero carbon" standards. 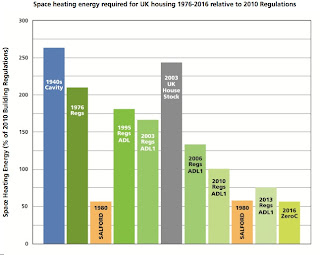 It makes for a good headline, but the colourful graphs used in the study are a little indefinite for my liking. There are no absolute measurements of energy use, just comparitors with other standards such as Part L at various stages. The sooner we convert all these standards to kWh/m2/a the better. Without a common denominator, the results are too easy to manipulate.

Another interesting statement:
The 1980-82 study involved detailed temperature monitoring at half-hour intervals in six dwellings over two years. It produced detailed results which showed that consumptions by different households varied by about a factor of five, from about 10% to 50% of traditional with an average of near 25%.

This corresponds with the observations of many others. There are huge variations on how individual homes perform. The Salford study suggests that the difference is largely down to the temperatures that people choose to heat their homes to, and that a house heated to 23°C would use four times as much as one heated to 18°C. They also suggest that that is true for badly built homes as much as well built ones. If this is true (and it seems likely, though once again there is no way of verifying it), then it has huge implications for the Fuel Poverty debate. The definition of fuel poverty is that you spend more than 10% of your income on energy bills, but without an effective way of monitoring how a household consumes energy, it's pretty meaningless.
Posted by Mark Brinkley