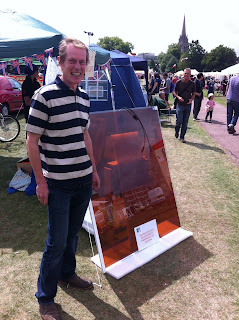 Cambridge is known throughout Europe as Start-Up Alley. All these whacky, sometimes nerdy boys coming through with their PHDs in things mere mortals can barely comprehend are encouraged to commercialise their research and to form companies with Greek-sounding names to market their work. Mostly this sort of thing goes on in the quiet of a science park, of which there are a number dotted around the town, but every now and then you come face to face with one and this Saturday, Hamish Stuart of Polysolar was displaying his invention at the French Fair on Parker's Piece, close to the main shopping streets.

Now, if I got it correctly, Polysolar is a new type of photovoltaic panel which is formed by etching the power-generating circuits into a sheet of glass, and then sandwiching it between two more sheets. Compared with the crystalline PV panels which dominate the industry, its dead simple and therefore potentially very cheap. It produces less power than conventional PV but it has the potential to be used as a roofing material or as a facade. Building Integrated PV, or BIPV. There's a new acronym for you.

They have already completed several installations in Taiwan and China, but they now have sorted MCS accreditation and are ready to hit the UK, as it's all eligible for the feed-in tariff.

And I only went there to get a baguette for breakfast.
Posted by Mark Brinkley