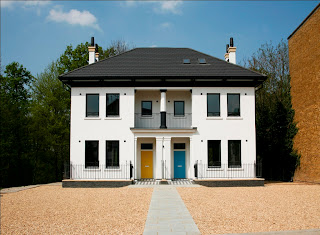 Good to see that The Natural House is open. At last. As far as I recall, it was meant to be up and running for BRE's Onsite 09 exhibition, but it had run into a few problems. I think the original builders went bust and it took a while to sort out a replacement crew. On time, on budget, it isn't. But is it on message?

I haven't seen it in its finished state (your roving reporter having temporarily stopped roving) but judging by Hattie Hartman's Footprint piece, I am puzzled by what point it's trying to make. The conclusion I am drawn to make is that this is a right-wing house, sitting in a small estate (OK Innovation Park) of left-wing houses. It is also a vocal house, making a statement about its political credentials. "I'm different and I don't care who knows it. Something 'bout me is not the same."

Enter Grant Shapps, our Housing Minister, who was on hand to open the house. Note it's red tape he is cutting, not blue ribbon! 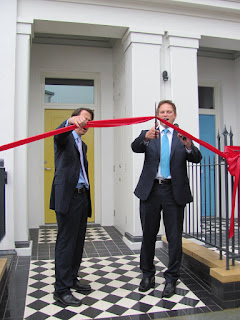 Very symbolic. His quote is also illuminating. Shapps said ‘delivering zero carbon was beginning to look quite alien and not synonymous with traditional looking homes. . . Natural House demonstrates that British design will still have a place on our streets and does not need to be replaced by Scandinavian-style, ‘eco-bling’ properties that wear their green credentials for all to see’.

Now hold on Grant. One thing at a time. Firstly, is this really what anyone would call "British Design." I'm really not sure. Although it's four square, faintly Georgian, it's also nothing like anything I have seen anywhere in the world. If you were to show me a picture of this house without knowing where or what it is, and had asked me to guess where it was, I think I would go for Germany, probably because the windows look German (in fact they are Austrian, quite close). I'm not even sure what a modern British house design looks like.

By implication, Shapps seems to be implying that the other houses on the BRE Innovation Park look Scandinavian, but once again I'm not sure that really holds water. One or two maybe - indeed one of them is Scandinavian IIRC. But mostly they look.....left-wing methinks. Or modern. I guess Scandinavia is pretty left wing. Certainly has very high public spending levels. Not to mention suicide levels - how existential can you get? There is a point to be teased out here, but I'm not sure it's Britain v Scandinavia.

Then there's the eco-bling comment. One of the things that the Natural House eschews is eco-bling, which is the derogatory term used for solar panels in particular, but also for all the various accoutrements which the government currently gives us subsidies for (i.e. heat pumps, biomass boilers, CHP plants, i.e. small scale renewables generally). Although the Natural House is not a PassivHaus, it's making much the same points — i.e. you don't need eco-bling, you just need to build it properly. No whether this is a left v right, modern v traditional battle, I have no idea, but it's a point to which I pretty much subscribe. Maybe that makes me right-wing?

The manifesto for the Natural House includes using not only "natural" materials but ones that can be sourced in the UK and ones that can be purchased off the shelf. Which shelf, it doesn't say? Harrods anyone? Eagle-eyed readers will already have spotted that the windows came from Austria (despite Howarth Timber now making them in Lincolnshire), but it also uses Thermoplan clay blocks for the walls (Germany), Pavaroof (Switzerland), Aereco ventilation (France), lots of timber (anywhere but the UK). At least the foundations (Bullivants) and the roof cover (Sandtoft) are British, plus much of the chintzy fit out.

And how is it heated? Hattie doesn't tell us. Nor does any of the other literature I can lay my hands on. It's certainly no post-heated MVHR system because it doesn't have an MVHR system - it relies on Aereco's passive stack system instead. Certainly won't be a heat pump. can't be a gas boiler? Can it? My guess is that it's some infernal biomass boiler, hidden away in the servants quarters. I bet you it's made nearer to Scandinavia than the UK! (But I won't mention eco-****).

So we are getting close to the knitty gritty of what this house is all about here. It shares a fabric-first approach with the PassivHaus — incidentally there is as yet no PassivHaus on the BRE Innovation Park — but it sets itself out as being diametrically opposed to the PassivHaus airtight/MVHR approach. Because? Well, it's not altogether clear. I guess because it's "unnatural". But they have in fact — according to the score sheet — built an amazingly airtight house with a score of just 1q50, which only narrowly fails the PassivHaus standard (0.6q50). That's an awfully tight score for a house with no MVHR and it will be interesting to see how it performs, especially if there is to be wood-burning appliances as well. My guess is it will struggle - or else there are vent holes which will be used to let extra air in which simply got closed off for the pressure test. Something doesn't add up here.

You see, if you go really airtight, you more or less have to install MVHR. I know some people disagree (Bill Dunster?), but the consensus of opinion is that if you construct something resembling an aircraft cabin, then you need to have a fan to change the air. Maybe someone, somewhere on some distant university campus will spend years testing ventilation systems and airtightness levels to get a conclusive answer to all this, but at the moment it's an unknown and MVHR is much the simplest way of dealing with this unresolved issue.