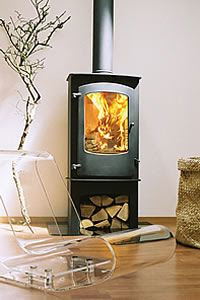 My attention has been caught by a fascinating thread over on the green building forum. It concerns the problems that one contributor, Justin, has been having with his neighbours complaining about the smoke from his wood burning stove. Or, as Justin likes to call them, “rich lard arses with no concept of sustainability, who run their car engines on cold mornings for minutes on end polluting my front garden as I get on my bicycle.”

Cue a general bashing of Daily Mail-reading Mondeo man? Not quite. Paul in Montreal, who contributes knowledgably on a number of subjects on this forum, describes the problems they have been having in Canada. “Wood burning has increased in popularity over the past decade to such an extent that we get smog in winter. This is due to the particulates from wood fires — even EPA low emission fireplaces emit significantly more hydrocarbons and particulates than, say, a gas fire.”

And an environmental health officer going by the handle of Rustychain commented about complaints about wood burners. “If there is a large shift in the number of people burning wood, clean stoves or not, we can expect air quality problems.”

This caused Justin to reconsider some of his earlier diatribe. “One irony is that back in the days when I owned an old house in a more rural village, and ran a hugely inefficient open wood fire, there was so much heat in the flue that the exhaust gas mostly shot straight up into the air and nobody knew about it. This delightful little stove with its two stage combustion and dancing flame burning off the soot as I watch just has less oomph left at the top of the stack. On reflection, it is probably causing more local pollution than the hugely inefficient open fires burning 5 times as much fuel.”

The most recent contribution was from John11668 who suggested that Justin should get a Flue Gas Analysis carried out. “This could give you some ammunition to defend your case to your neighbours but I suspect that it is more likely to demonstrate to you that your appliance is a poisonous nuisance in a built up area. Sold fuel stoves are not really suitable for a dormitory suburb, even if you can see the open countryside from your upstairs window.”
Posted by Mark Brinkley