My hot tip for property investors 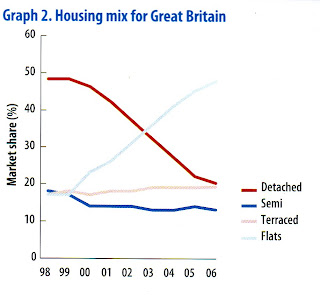 Here’s an interesting little graph, which I gleaned from the Oct 07 edition of Housebuilder magazine. It shows the extraordinary transformation in the supply of new homes in Britain over the past decade. In 1998, nearly half of all new homes were detached. Today, the figure is just 20%. In contrast, flats have gone from around 18% of the total to just under 50%. Effectively, the positions of detached houses and flats have swapped over, whilst terraced houses and semis have stayed much as they were, at least in terms of proportions of overall mix.

Now there are well-known reasons for this turnaround. 1998 marked the start of the brownfield land building campaign and the move towards densification. Or put another way, it marked the beginning of the end of developers being able to buy green fields and plonk estates of detached houses on them at very low densities.

Nevertheless, I am still struck by this graph. The turnaround really is quite dramatic. And it does make you wonder whether this emphasis on building flats is sustainable (in the economic sense). It would seem that, all other things being equal (i.e. pre 1998), housebuilders would be knocking out masses more detached houses than they are, but the constraints of the planning policies have more or less put a stop to this. Presumably the underlying demand for detached homes is as large as ever: given the choice, most people would probably rather bring up a family in a detached house with a garden rather than a flat. And most young flat dwellers would probably envisage themselves moving into a detached house if and when they start families. That looks as though it’s going to become an increasingly difficult aspiration to meet. So if this new housing mix remains in place — or even becomes more pronounced over the coming years — then expect to see the relative value of detached houses increase, and flats to decrease.

How’s that for a bit of financial forecasting? Revisit this blog in 2017 and see if my prediction works out.
Posted by Mark Brinkley