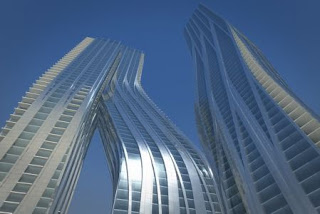 Yesterday I finally got to see the Zaha Hadid exhibition, which is on at London’s Design Museum till late November.

Three things struck me. Firstly, the place was jam-packed full of art and/or architecture students who were busy photographing and sketching the various exhibits. I suspect (it being a school day) that they had all been sent their by their tutors. Hadid is therefore obviously seen as a suitable case to study.

The second thing was how glorious the canvases are. She is a fantastic painter, in a rather surreal, science fiction sort of way. There was bumph in the brochure about how she had studied Russian Constructivism as a student: it’s not a movement I know anything about, but it makes for some really stunning images. If there was a readily identifiable school, I would have said it was Star Wars crossed with Thunderbirds. In fact, her first house design (Peak House?) looked suspiciously like the one on Tracey Island to me. It all had a strangely 60s and 70s feel to it: perhaps a little dated now, but also rather re-assuring. It’s how we used to speculate about what the future would look like before the internet was invented.

Finally, the buildings. One word will do: sterile. They really didn’t do it for me at all. Maybe I am already starchitected out on Libeskind and Gehry, but Hadid’s buildings just looked like more of the same to me. Clever? Yes. Outrageous? Yes, but so what. More like: rich clients wanting to make a statement about their wealth and taste.

I think she should have stuck to painting. Or maybe film sets.
Posted by Mark Brinkley