Yesterday, I went to Think07, a new conference/exhibition put on at London’s Excel by CMP Information, owners of Building magazine and Property Week. With my press pass whisking me hither and thither, I spent a really enjoyable six hours there talking to a variety of people and listening to talks from a number of distinguished speakers including green skyscraper-builder Ken Yeang, Sainsbury’s boss Justin King (very slick performer, a politician-in-the-making) and BedZed’s Bill Dunster. Having featured Dunster in this blog very recently (Apr 3rd) and been somewhat critical of his obsession with wind turbines and PV cells, I thought it would be a good opportunity to see what he has to say about the matter.

To his credit, he doesn’t shrink this issue. “Let’s throw away this offsetting concept,” he said. “The job we have ahead of us is to get the world ready to run on renewable energy because fossil fuels are running out.” So far so good, I am right with him. However, he then launches into some very contentious stuff which he admitted got him into long arguments with engineering buffs. Firstly he insists that renewable energy will only ever be capable of supplying 30% of our current electricity use and, furthermore, that a green grid would only be able to supply about half of this 30% and that, consequently, the rest had to come from on site renewables.

I quizzed him about this in the Q&A session at the end, chaired by Zero Champion’s Phil Clark. “Bill,” I said, somewhat over familiarly perhaps, but what the heck, this was my moment in the limelight, “generating renewable power using mega wind turbines is much more efficient than on site. Isn’t it a mistake to mess around with microgeneration and shouldn’t we be concentrating on greening the grid instead?” Bill wouldn’t be moved. “It’s not either or, it’s both,” he said. “There simply isn’t the capacity to be able to produce that much renewable power from the grid.” It’s not exactly easy to have a conversation when you are in a room with about 100 other people listening in, but I managed a counterblast. “The North Sea is very big, you can get an awful lot of wind turbines out there.” Bill was unmoved. “It’s not nearly big enough. You are restricted to the Continental Shelf and you have to leave a large gap between each turbine and there simply isn’t enough space out there to generate all the electricity we need.” And that was the sum of our discourse.

Bill Dunster has done his homework. I can’t fault him for that. But has he got it correct? I had no idea. This morning I got out that swot’s handbook, Wikipedia, and started to look for an answer.

As you’d expect, there isn’t exactly a simple answer to such a question, but there are lots of pointers to suggest that I am right and Bill Dunster is wrong. Denmark, the country that pioneered wind turbines, already draws 20% of its electricity from wind and plans to make that 50% over the coming years. OK, it’s a small country, but it’s hard to imagine that the UK couldn’t do the same. There is another telling sentence in the article on renewable energy, although of course being Wikipedia there is no way of verifying it. Globally, the long-term technical potential of wind energy is believed to be five times current production global energy consumption or 40 times current electricity demand.

George Monbiot looks at this problem too in his book Heat where he has a chapter called How much energy can renewables supply? He mentions a 2005 government White Paper paper called
Offshore Renewables — The Potential Resource which confirms the figures coming out of Wikipedia — i.e. that our potential offshore wind generation capacity is enormous, over eight times our total current electricity demand. Obviously, there is a big gulf between what is potential and what will ever be practical but exactly what the limits to practicability are remains a matter of conjecture. What is clear is that assumptions are constantly changing and that off shore wind turbines seem to be getting bigger, and are getting placed further from shore and at ever deeper locations which suggest that the Danish expectation of delivering 50% of its electricity requirements from wind may not be far fetched at all. There is obviously a problem with the fact that wind is intermittent and that therefore wind on its own may never be able to supply all the electricity requirements. But then there are other technologies that may step up to the plate and fill the gap.

In truth, I haven’t spent as much time as I should researching this fascinating subject, but you can see that you don’t have to delve very deeply into it to see that Dunster’s contention that we will only ever be able to supply a small fraction of our electricity needs from large scale renewables looks pretty silly, as Denmark has already shown. So no, Bill, I am yet to be convinced that every home needs to be covered in PV cells and have a micro wind turbine attached to it.

There was another aspect of Dunster’s 40-minute lecture which raised the hackles of someone else in the audience. It was his contention that ground source heat pumps are bad news: “There is no heat pump anyone has yet designed that doesn’t double the electricity load.” As heat pumps are a form of electric heating, this is hardly surprising, but a heat pump can reduce the overall carbon emissions from a house because of their gearing effect — they manage to shift three or four units of heat energy from the ground outside into the house for every one unit of electricity used to run them. So to dismiss them out of hand because they use electricity does seem a tad eccentric. 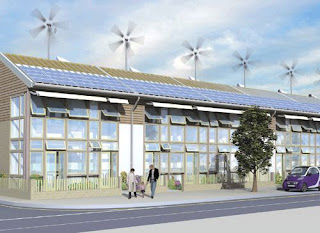 Bill Dunster’s goal is, it seems, to always aim for zero-carbon on a site-by-site basis so the fact that heat pumps get you only part of the way there becomes a big drawback for him. Instead, he seems to prefer burning biomass. He mentioned something I hadn’t come across before, a National Biomass Quota, which suggests that each individual in the UK can burn up to 250kg of dry biomass per annum without causing undue stress on our resources. I think this is a concept born out of his own research and I have no idea how you would check it (Wikipedia doesn’t seem to have heard of it), but I can at least see where he is coming from. The problem for many biomass schemes is that whilst they can be seen to work fine for a handful of small developments, they don’t really represent a mass-market solution because of a shortage of biomass to burn. Whether this is so or not, who knows, but I guess that a Biomass Quota is an attempt to quantify just how much there is out there.

But the net upshot of all this is that Bill Dunster comes with lots of opinions and lots of baggage. He therefore causes debate and controversy. Put simply, not every agrees he’s got it right. His Zed Standard, which he touts as the best solution for zero energy living, is even more prescriptive than the German Passivhaus standard which I have been mildly critical of over recent months for itself being too prescriptive. At one point in his presentation, he asked, almost poignantly, “Why does the industry have such a negative view of BedZed?” This was very revealing because, by and large, I don’t think the industry does have a bad opinion of Bedzed. Far from it. Rather they maybe don’t have quite such a high opinion of it as Bill himself does. They give it 8 out of 10, not 10. I think he could more usefully ask: “Why doesn’t everyone agree with me?”
Posted by Mark Brinkley