All Planned Out and the Irish Conundrum 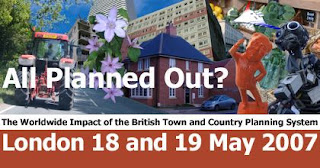 On this coming Saturday, May 19th, I am set to appear at a Conference called All Planned Out, to be held in London’s Building Centre. It’s been organised principally by Ian Abley of Audacity and it’s set to explore the tangled web woven between the housebuilders and the planners. It’s a hot topic this week, as Gordon Brown has just gone on record as saying he wants to make housing affordability a key plank of his administration’s policies. Good luck, Gordon.

Audacity’s line on all this is that we can build our way out of this problem. House prices too high? Let’s bung up 500,000 a year for ten years. Sorted. Brown seems to agree but, being a politician, presents a very watered-down version with just five new Eco Towns instead.

But the Irish experience suggests that a mass housebuilding programme may not deliver the goal of affordable house prices. When I first became aware of the Irish housebuilding boom, six or seven years ago, I was just amazed to find out that they were building 50,000 new homes a year in the Republic. On a per-head-of-population basis, this was approaching five times the rate the UK was achieving at the time.

Did this ease the upward pressure on house prices in Ireland? Did it heck. Since then, they have trebled.

Last year, there were apparently 90,000 housing starts in Ireland, just an incredible number in a country with a recorded population of no more than 4.2 million (though it may well, in reality, be much higher than this now). At long last, supply appears to be outstripping demand and lots of these new homes are currently unoccupied, bought as investments or as holiday lets, whilst lots more are rented out to East European construction workers, employed building yet more homes. And still Irish house prices keep going up. It looks like a classic bubble, a speculator’s binge fest, but people have been saying that for years and the bubble just refuses to burst.

Does the Irish example have any relevance to the UK? Our equivalent total to Ireland’s 90,000 new housing starts in 2006 would be no less than 1,200,000, roughly seven times more than we actually achieved. It makes even Audacity’s rallying cry of 500,000 a year look puny in comparison. You would need a microscope to even see Gordon Brown’s five Eco Cities. And yet, even this enormous house building boom hasn’t delivered affordable housing to the young of Ireland. What’s going on there? Maybe, we’ll be able to find out this Saturday. In the meantime, mug up via an article on Wikipedia entitled the Irish Property Bubble.
Posted by Mark Brinkley