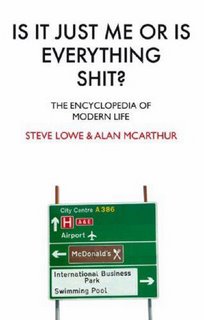 Santa Claus bought me a copy of Is it Just Me or is Everything Shit?. I can’t be alone because it’s a runaway hit in the booktrade this year and currently lies at No 3 in the amazon.co.uk best sellers’ list.

What is it about this book that has made everyone rush out and buy it? It seems to have stumbled on the grumpy-old man, anti-New Labour zeitgeist that has taken over this country after nearly nine years of Tony Blair, political correctness and spin. It’s also very funny, which helps. You can pick it up anywhere – it’s split into dozens of short, unrelated articles, rather like a blog in fact — and each one is almost certain to draw a smile if not a chuckle.

One section that made me laugh out loud is entitled Improving the Value of Your Property. Property journalism generally has always struck me as being particularly boring and trite, the same advice being recycled over and over again, and I for one am probably as guilty as all the rest. But here is the antidote.

Here are some of Steve and Alan’s excellent tips for improving the value of your house:
• Ruthlessly cut out all natural light with ripped up rubbish sacks over the windows
• Scatter pig’s entrails around the landing
• Put a big sign on the door saying Jesus loves this house
• Open up the hallway as a public bridleway
• Shit on the floor
• Take in waifs and strays
• Replace your cooker with a tiny plastic one made for children that doesn’t even have any connections for the gas/electrics.
• Burn the fucker to the ground
Posted by Mark Brinkley