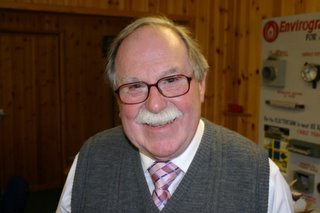 Last Thursday morning (Jan 19), I drove down to Barfrestone in Kent to meet Derek Ward, the founder and MD of Environmental Seals, aka Envirograf. Derek is in his 70s now but still burns with the passion and enthusiasm of a teenager, always on the look out for new products and new inventions. His thing is fire protection and he has built up a 180-person business making and selling fire protection products throughout the UK and, increasingly, abroad.

Fire protection sounds deadly dull. OK. I can do better than that. Fire protection IS deadly dull. But 90 minutes with Derek isn’t dull and if you show the slightest interest in the subject (and I probably displayed a little too much) he is off and away. Just like a house on fire, in fact!

I first came across his company in the 1980s when they sprang onto the scene making intumescent paints for turning ordinary doors into fire doors, one of the requirements placed on builders doing loft conversions. For builders undertaking loft conversions — and we did quite a few — his paints and varnishes were a godsend. Normally, a fire door is a great heavy beast, an extra 10mm wider than a normal door and a whole lot heavier. You can physically add timber to a regular door to give it extra fire protection but in so doing you destroy the look of the original door. Alternatively, you can paint it with one of Derek’s paints for around £30 a door, much cheaper than a new fire door. Need your wall or ceiling uprating? You can fix an extra layer of plasterboard, skim it, rewire the electrics, fiddle around with the coving and the decoration. Or you can paint it with one of Derek’s paints.

And he doesn’t just do paints. There are lots of other bits and pieces like intumescent pads and sprays, which can fire-proof anything from steel beams to Xmas trees.

Derek is part inventor, part entrepreneur. Pose him a fire-proofing problem and he’ll come up with a solution. His concoctions are not particularly hi-tech: mostly he messes around with conventional materials like PVA glue and Rockwool and he uses a lot of exfoliated graphite which expands when it gets hot, and turns a flat pad a few mm thick into an insulating quilt which stops the heat getting through. That is the key: looking for products which expand under heat and thus provide instant fire protection. He tests the products in his own lab in Kent and when he is satisfied that they provide adequate protection, he sends them off for testing at an independent lab that will give third party certification. Each year the product list grows longer and his annual testing budget has now grown to £400,000. Currently more and more products are being tested in Holland to meet the more stringent European standard EN 13823 which has yet to become established in the UK.

The Envirograf sales list just keep growing and growing. Currently they are making huge number of fireproof hoods for downlighters. Putting a downlighter into a ceiling reduces its fire protection rating from around 30 minutes down to just four. Fire-proof hoods, costing around £6 each, are the answer. They are also beginning to sell a lot of socket boxes with intumescent pads in them. Interestingly, this has been a requirement of the wiring regs since 1992 but it has been widely ignored until recently. Any hole in a compartment wall, such as a downlighter or an electrical socket, is a weak point in the room’s fire resistance, and as building inspectors are slowly becoming more aware of these issues, Envirograf’s tailored solutions are selling into an expanding market.

I asked marketing manager Mike Woolmington what the competition was like. In a word, it’s fragmented. There are lots of businesses selling intumescent paints but often only in 5lt tins. Others make intumescent strips for door openings, but no one else makes both. The Envirograf range is unique: they really are a classic niche business. If you have a problem relating to fire-proofing, Envirograf reckon they will have a cost effective and non-disruptive solution, backed by independent testing and acceptable to building control and fire officers. If you are undertaking alterations to existing buildings which require you to use better fire-proofing standards, it’s well worth getting acquainted with Envirograf’s product list. The chances are they will have something simple which will save you a lot of hassle.