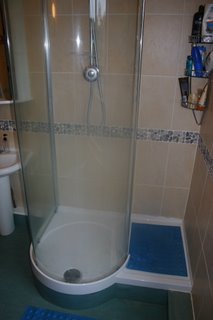 Early last year, we did a bathroom refit. When we built this house, in 1992, the standard arrangement was to build a family bathroom, complete with bath and shower mixer tap, and an en-suite bathroom, which had a shower but no bath. Like sheep we followed the herd. And, in truth, this arrangement worked fine for many years whilst the children went through primary school.

But children grow up and teenagers don’t do baths. No, they like to shower. For ages and ages. So it came to pass that they all started wandering into our bedroom at all hours so that they could shower. Well, of course, this was just NOT ON. Something had to give and what gave was about £10k’s worth of bathroom and plumbing alterations.

Of course, bathroom styles have moved on a bit since 1992 and a must-have feature of contemporary bathrooms is a curved shower screen. OK, we’ll have that one. In our case, a 1200mm Matki, cost £731 complete with curved tray. Oh and it wouldn’t be up to the minute without a digital shower, would it? In our case, the Aqualisa Quartz (£375) with an alternative push button on/off switch mounted just inside the bathroom door (extra £36).

In truth, they are both great. The Aqualisa Quartz shower system saves fiddling about with thermostatic controls. In fact it saves messing about with anything as you just push the button to turn it on and a neat little surround light flashes red until it reaches the correct temperature, at which time it stays red. To turn it off, you just press the button again. The first push button switch we fitted was defective. However, a replacement sorted out the problem in a matter of days.

The shower screen is also a qualified success. It looked fantastic when fitted but we live in a very hard water area and within a week it was caking up with limescale. And there is so much glass that it started to look really naff very quickly. However, help was at hand. One of the other jobbies we undertook during this refit was to install a water softener, a real salt-eating ion-exchange softener. The softener went live about three weeks after we started using the shower and since then the glass has started to get cleaner. Getting limescale off glass is a bugger of a task (citric acid solution is best) and yesterday I took 45 minutes out to clean the shower and I still couldn’t all the residual limescale off the glass. Just three weeks hard water use back in April and it’s still there.

The upshot of this is that if you must fit a fancy glass shower screen and you live in a hard water area, don’t even think about it until you have fitted a water softener.
Posted by Mark Brinkley