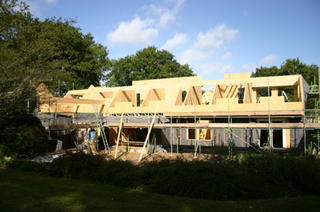 I have been writing about SIPS (Structural Insulated Panel Systems) building panels for five years now. In that time I have been on six sites where they have been being used. Each time there has been a tremendous amount of enthusiasm for what’s being, or has just been, built. And yet each time there also seems to have been a catalogue of mishaps and delays. These are somehow never attributed to the SIPS building system itself, but seem to be caused by the shortcomings of the designs or the supplier.

This time last year I visited a site of six terraced houses being built by Nick Robinson in Hampshire. Nick is a professional housebuilder with a keen interest in new construction systems. I had previously seen a site he had built out using steel frame, which had worked pretty well. But when he enquired about using steel frame again, Corus, the manufacturer, told him they were no longer interested in supplying small sites so he had to look elsewhere. Nick chose Kingspan’s TekHaus, a polyurethane SIP panel made in Germany, and the main player in the nascent UK SIP market.

I had seen Nick a few weeks before visiting his site. Back then, he had already laid the foundations and he told me then that he hoped to have the structures of all six houses up for my visit at the beginning of October. The reality couldn’t have been more different. Two slabs were untouched and on the four where a start had been made, none had a roof panel on. Kingspan were using a middleman, known as a process partner, and he had screwed up badly. Deliveries were late, were in the wrong order, were sometimes damaged and some panels were cut wrong. A lot of time was wasted on site trying out to sort this mess out, and often rebuilding the panels. Brain Clark of IPC Erecting, who ran the site crew there, told me that they eventually finished the contract at Christmas. What should have taken six weeks took nearly five months.

Last week I was in Wiltshire visiting another Tek Haus (pictured) in the process of erection. Who should I run into here but Brian Clark. And what was Brian’s erection crew up to? Mostly snagging again, it would seem. This contract, a single house of just over 300m2 floor area, had started on August 1st and was booked for a three-week erection. Here we were, in Week 8, and the roof panels were yet to go on. The story behind the delays was familiar. Unresolved issues with structural design, panels being supplied that weren’t quite right, glulam beams being supplied which weren’t nearly right, crew waiting for cranes. All little niggly things, all very disruptive. If these two jobs were exceptions, all well and good, but the truth seems to be that they are not exceptions at all and that delays and overruns are in fact the norm with small SIPs projects.

I was first introduced to SIPS building in Britain by Tim Crump, proprietor of TJ Crump Oakwrights, a Hereford-based green oak housebuilder. Tim was an early adopter and had understood how and why SIPS were beginning to take-off in North America where they are frequently used to wrap-around custom homes. Tim built several houses incorporating SIPs but by 2003 he had fallen out of love with the whole concept. At the time Tim told me that he thought there was a big gap between theory and practice and that they always seem to spend far too much time sorting out snags on site that should have been designed away in the office, before the panels ever left the factory. Tim ended up losing money on a contract to erect two houses for an architect because none of the pre-cut panels actually fitted together as designed. After that, he has steered well clear of factory-made panels and carried out this type of work in timber frame with his own site crew.

So is the SIPS bubble about to burst? Far from it. Adam Holmes of Kingspan told me this weekend that the TekHaus system is making great progress in the social housing market and that the volumes they are doing are now enough to justify setting up a manufacturing plant in England. SIPs score highly on the EcoHomes ratings and housing associations have to take this into account when placing orders for new housing. It seems that with all the money the government is throwing at affordable housing, the future of SIPS is looking pretty rosy. Or at least it is for Kingspan’s TekHaus, which is out and away the most important of the UK suppliers.

However there must be a question mark over the use of SIPs in the selfbuild and one-off developer sector. The way Kingspan have organised this, the responsibility for design and erection falls onto a number of regional process partners who effectively quote against each other to supply essentially the same product. This creates some surprising anomalies; for instance, the house I visited in Wiltshire was being supplied from Northumberland, because the quote was 25% cheaper than the local supplier. The Northumberland supplier, SIPHome, might just have made money on the project if, as they had planned, it had taken three weeks to erect and had been all delivered in six loads. But of course, the job had overrun spectacularly. This of course was SIP Home’s problem but it doesn’t instill confidence in a delivery system that is so wayward and disorganised.

It’s not as though these SIPS systems are cheap. The Wiltshire contract for erection of watertight shell was valued at £68k. It’s hard to see the equivalent in blockwork, or a basic Taylor Lane-style timber frame, costing more than £50k, including all the insulation. Whilst the resulting home should be extremely energy efficient — there is no central heating system, as such, just a mechanical ventilation system with heat recovery — it’s still an awful lot to pay for a finish standard, which could easily be achieved by other means.

The question is this. Is there something inherent in SIPS building methods that makes them prone to delay and cost overruns? Or is it just that the assemblers haven’t really worked out how to get the best out of the system. For what is clear is that the goodwill towards what promised to be a new, green building method is running low and that if someone doesn’t sort it out soon, it is in danger of evaporating altogether. Many selfbuilders I meet are very enthusiastic about using SIPS for their projects but it seems that they are not really getting the service they pay well for and hence deserve.

It may be that in the short term, SIPS are best suited towards very simple structures such as you would find in most social housing projects and maybe commercial sheds, but not for the more complex designs met in the selfbuild arena. In theory, the design skills needed for SIPS construction should be very similar to timber frame and there really isn't any reason to expect problems, but in practice there seems to be a skills gap somewhere in the SIP production stream which is proving costly and frustrating. What should be a simple, quick and efficient system is currently anything but.
Posted by Mark Brinkley