My wife wants an Aga — can you help? 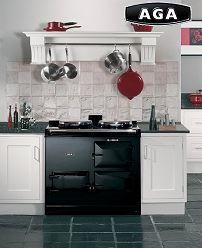 My wife and I have recently bought a one-acre plot near Cambridge and have just started getting quotes for the timber frame. I'm also shopping around for everything else. One of the things on the list is an Aga.

My wife would `loooooove' to have an Aga, but this would mean I will have to build another chimney, and my concern is that as we are building a small 3-bed cottage an Aga will be too hot. Our house will be extremely well insulated and have under floor heating. I wonder if having an Aga will mean we have to leave the windows and doors open!!

What are your views about Agas?

The Aga stands head and shoulders above all other gender issues in selfbuild land. 95% of women aspire to owning one, 95% of men just don't get it. I have seen many an otherwise well-thought out ecologically-slim footprint completely blown out of the water by a shiny new £5,000 Aga in the kitchen. Indeed I suspect that there are many husbands who have only managed to persuade wives to go through the four years of chaos and upheaval it takes to selfbuild by using the promise of an Aga in the kitchen at the end of it all. It's a powerful, if expensive, seduction tool, the ultimate selfbuild babe magnet. If it's the price it takes to get a selfbuild off the ground, maybe it's a price worth paying.

As a man, I am one of those who just don't get it. I have cooked in houses with Agas and about the best thing you can say for them is that they are quaint. But as a man, "What do I know?" as the current saying goes. Yes, the Aga will definitely be too hot for a three-bed cottage, but what’s logic got to do with it.

However I have to hand a possible cure, sent to the selfbuild list by Roger Browne, in Feb 2001. Show it to your wife: she won’t thank you for it, but it's the only known treatment for Agaphilia and it just might make a difference. However, be warned, there are sometimes some unexpected side effects for which the best treatment is Mercury - the range cooker, that is.

STARTS
One of the prime pieces of self-build techno-lust seems to be an Aga cooker. I bought a house that happened to have one, and my advice is:
• don't bother.

Let's recall the history. Back in the days when a coal stove took hours to light and get going, the Aga would have been a godsend. A slow steady burn, 24 hours per day, produced heat which was stored in the body of the oven for use at cooking time. You "only" had to fill it with coal everyday, and turn the riddling handle twice daily.

If you are stuck with coal, I can see the value of an Aga. But if you are cooking with gas, what's the point?

I've had to live with the damn thing for a year now, and have formed the opinion that an Aga is useless apart from its value as a status symbol. It does impress the visitors - but that's not something I care about.

• An new Aga costs around £5,000, including installation. Even an old used one is, say, £1,500. On the other hand, for under a thousand pounds you can get some really nice gas ranges.

• The Aga needs a flue; most gas ranges don't.

• The Aga burns gas night and day, whether you need it to or not. In winter the "wasted" warmth is useful to heat the house; in summer it's like taking a match and burning a pound note every day (if you live in Scotland that is; in England you have to try to burn pound coins).

• If you go away for a holiday, and switch off your Aga, you can't cook with it for a day or so after you get back and switch it on, and it warms up.

• The Aga is supposed to be serviced every six months. Aga servicing costs a fortune. And you have to have the Aga cold for the service engineer. So that's another day or two without cooking every six months.

• If you buy an Aga more than a few years old, it probably has asbestos rope insulation in the lids (newer models have ceramic insulation).

• When you lift the lid, children can't see any indication that the plate is hot, and horrendous burns can result.

• For effective cooking, you need very thick solid cookware with flat machined bottoms. This is the very same criticism that gas snobs make of electric stovetops, yet the Aga has the same problem.

• The flat-bottomed cookware that comes with many used Agas is machined aluminium. Aluminium cookware is one of the suspected triggers for Alzheimer's disease.

• The cook plates have no temperature control. You have to work with what you've got. Sure, you can follow the instructions in the user manual and shuffle your pot half-on-half-off the cook plate. What a fiddle!

• The cook plates are large. Whilst you can juggle two pans on one cook plate, it’s hard to do this satisfactorily. Whether you have one or two pans on it, large amounts of heat are still wasted from the uncovered parts of the surface.

• The cook plate temperature drops during a heavy cooking session. When my wife boils up a batch or marmalade, we always end up finishing it off in the microwave because by then the Aga has lost too much heat.

• Sure, you can do other things with the Aga apart from cook. The Aga instruction manual suggests such bizarre rituals such as ironing clothes with it! It can be useful for drying clothes on top - but of course that's only if you don't want to actually use the thing for cooking at the same time.

• The ovens have no temperature control. OK, there are ways to adapt for that. "You just have to get to know your Aga" say some. Yes, there are workarounds for its quirks. The Aga cookbook is full of Aga versions of recipes. They can take a very simple conventional recipe ("Cook for two hours at 200 degrees C") and turn it into a major epic ("Put on the boiling plate for ten minutes. Cover and move to the simmering plate for 30 minutes. Transfer to a shallow pan and leave it in the simmering oven overnight. Finish off with 45 minutes in the baking oven before serving.") Gimme a break!

• The oven has no timer. You can't just set it to cook your supper in time for your arrival home. Even a £179 B&Q cheapie oven can do that kind of thing!

• There's no window on the oven door. You can't see how your cooking is browning, unless you keep opening the door to check.

• The airflow from the oven is up the flue - there are no baking smells in the kitchen to guide you to when something is "just right". Best way to cope is to go and do some gardening downwind of your chimney. You then have some chance of noticing when it is about to burn.

• Nothing is simple. You can't just "bake a cake" if you have the two-oven Aga. You either have to buy a special cake-baking accessory (I think it's an insulated container), or else you can follow some bizarre instructions to boil away three pans of water on the boiling plate so that you have reduced the temperature of the oven by enough to enable you to bake a cake. Really!

• The Aga can also heat your hot water. In summer, and in winter too, if you don't do too much cooking or use too much hot water or chant the wrong mantras (or expect to get the same efficiency as a boiler).

• Even the smaller Aga takes up much more space than a gas range. You really do have to allow for a bigger kitchen - which adds to your housebuilding costs.

• You also have to lay concrete reinforcement. You can't just put an Aga on a kitchen floor and expect to have any kitchen remaining afterwards.

Yeah, I really love my Aga!

OK, I know all of this is sacrilege to the true believers amongst you.
But when I get around to re-doing the kitchen, one thing is for sure -
the Aga will be sold to the highest bidder.
Posted by Mark Brinkley