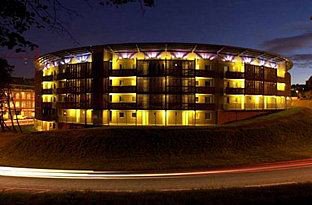 A flagship off-site construction project in Leeds is being evacuated because of fears it will blow down in high winds. Caspar (pictured here) was built in Leeds six years ago by the Joseph Rowntree Foundation (JRF): it was one of the first of the new wave of prefabricated housing projects which the government has been so keen to promote. Oh dear. Oh very, very, dear.

Where did it all go wrong, John?

One of the key selling points for using off-site construction methods is that the amount of snagging is minimised. The aim is to hand over the new building “defect-free.” No doubt when Japanese contractors Kajima handed over the 45 flats that make up Caspar to the JRF for them to rent out as affordable homes for swinging Leeds singletons, much was made of the advantages of all this.

But, according to a report in this week’s Building, something’s obviously been amiss there for a long time because Arup, our premier building consultants, were hired to look into things, and Arup have said “Yipes – get out of there before the next storm.” What they’ve actually said is that there is a 2% chance that the whole building will collapse in high winds. JRF have even admitted that, if the cost of repairing the fault is excessive, they will consider demolishing the whole structure.

Is this the beginning of the end for modern methods of construction, just as the collapse of Ronan Point in 1968 marked the death-knell of system-build in the UK 40 years ago? It’s impossible to say. Caspar (stands for City-centre Apartments for Single People at Affordable Rents (neat or what!)) is just one of many such projects and, unlike Ronan Point, no one has been killed or even hurt. But the failure of Caspar does pose some very uncomfortable questions. Such as…

Why are so many of these schemes prototypes?

Why the curved roof? Doesn’t it look suspiciously like a wing!

Why the curved anything? I thought this was meant to be affordable housing.

Is this stuff really so very different to the 60s tower blocks?

Is it a design failure or is it, yet again, a workmanship issue?

This project was actually conceived as half-modular, half-flat pack. It was designed by Levitt Bernstein, an architects’ practice at the forefront of the new social housing, and factory-built by Volumetric in Bedfordshire. The superstructure was erected in less than three weeks. Each flat is 51m2 and cost £68.6k to build. That’s a typical outcome for these schemes. In other words, they are rather more expensive than conventional builds. They would become cheaper if we built thousands of them but we don’t. Every scheme is different. Every architect has a different spin to put on the concept of off-site construction.

And now here, in the brave new world of modular construction, we have an award-winning scheme about to be condemned.
Posted by Mark Brinkley

Email ThisBlogThis!Share to TwitterShare to FacebookShare to Pinterest
Labels: MMC