Selfbuild at a crossroads

Whilst selfbuild is now fated on TV and in the press and has become an aspiration for hundreds of thousands of people, the supply of land needed to keep the ball rolling is in danger of drying up because government policy is set against low density housing.

As recently as 1997, 47% of all new homes were detached. By 2004, it was just 19%. This startling turnaround has been entirely due to changes in planning policies, resulting in hundreds of Poundbury-style high density housing sites springing up across the country. Whilst the demand for these new homes remains reasonably strong, nobody is complaining too loudly.

But in killing off the sterile and little loved “executive housing” estates, the new planning policies also threaten to stop the flow of innovative and experimental homes being built by today’s selfbuilders.

One of the side-effects of the new planning regime is to increase demand for single building plots. This, in turn, makes the whole process of homebuilding more expensive and results in the build budgets being cut. You already have to be fairly well-off to afford to buy building land: soon only the very rich will be able to build interesting houses on these plots. 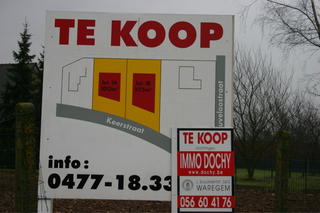 Contrast this with the situation in the rest of Europe where land is often set aside specifically for selfbuild schemes, which most people regard as a sensible use of rural resources. Even in the more densely populated areas like Germany and the Benelux countries, you will regularly come across building plots for sale for the same price as a large car. The pair of plots in Belgium pictured here were on offer at €40k each earlier this year. In stark contrast, building plots fetch rather more than the cost of an average house in SE England. The painful truth is that the more we spend on the land, the less we have to spend on the building and as a result most of our designs and our building methods are decades behind what has been happening elsewhere. Whilst we seem to be collectively mesmerised by the gleaming efficiency of German-import Huf Haus, who have now built around 50 houses in Britain, the reality is that is how 30% of all houses are built in Germany.

The nearest we come to factory-made houses is our native timber-frame industry, which supplies just the skeleton of the house. In Scotland, where land is relatively cheap, it’s taken off in a big way and accounts for nearly two thirds of all new homes and an even higher percentage of selfbuilds. Scotland also has an extremely well-developed selfbuild infrastructure with hundreds of businesses competing to design, finance, insure selfbuilds, besides actually building them.

South of the border, the situation is rather more piecemeal. In areas where land is less expensive, selfbuild flourishes as a viable alternative route onto or up the housing ladder for people on ordinary incomes. But as you get nearer to London and land prices escalate, “normal” selfbuild, as practiced in the rest of the world becomes impossible. Virgin plots with road frontage are now very rare and what we are now seeing is that the majority of single plots coming to market have been formed by the subdivision of large gardens.

Whether this on-going densification of our villages and suburbs is something future generations will thanks us for is doubtful. This process is a direct consequence of the pressure, coming from amenity groups such as the Council for Preservation of Rural England, not to release greenfield sites around villages. But the side-effect of this policy is to destroy the siting and integrity of much of our most cherished housing stock by cutting swathes through long-established gardens and erecting fenced off entrances to backland development. Currently, this is only way that the huge pent-up demand for single building plots can be met.

Selfbuild should form part of the very backbone of rural life, enabling communities to grow organically from within rather than by having alien estates grafted onto them by master planners and national developers. But today planning matters are all dealt with by remote local authority offices whose wishes are, in any event, increasingly being overruled by central government. Selfbuild as an aspiration has taken root with the British public: but for that aspiration to become reality for more than a few, government needs to recognise that it has the potential to become a significant contributor to our future housing stock, as it is in most western countries.
Posted by Mark Brinkley