Why is there so little selfbuild in the UK? 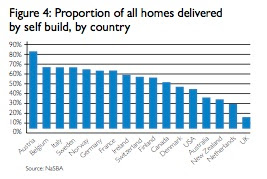 The Coalition government has been the first one to get interested in selfbuild. Grant Shapps, its first housing minister, is a fan and he set in motion an action plan to double the amount of selfbuild in the UK. Inside the published report is a tell-tale bar chart (seen here) which shows the level of selfbuild activity across the developed world and, surprise, surprise, the UK is bottom of the list by some margin. For most countries between a third and two thirds of their new housing stock is selfbuilt; in Britain, it's between 10 and 15%.

Rarely can a bar chart have been so significant in shaping policy. One glance at it tells you something very straightforward: what goes on in the UK housing market is not normal. But just why we have developed a different housing market?

There are a couple of other cogent statistics which tell us more of the same story. Our new homes are smaller than elsewhere. And we build fewer of them. By way of comparison, in 2012 the UK will build around 100,000 new home whilst in Germany, a country with a population 30% larger and with lower levels of immigration, the figure will be around 220,000, or 60% more per head. Of which, according to our chart, 60% were selfbuilds. So there are more new selfbuilds in Germany each year than we manage to build in our entirety.

I can believe it. You don't need to go to Germany to see how homes are built. Just visit Google Earth and hone in on the suburbs of any town or city in Germany and you can see the tell-tale signs of the owner-built home. In England, the development is structured, uniform and compact. In Germany, it's much looser, the gardens are bigger and the layouts seems more organic. The houses themselves are also much more individuated, although they don't appear from the sky to be anything too risqué in design. Don't think for a moment that 60% selfbuild equates to lots of radical architecture. It doesn't.

The question is why have two seemingly quite similar countries developed such different private housebuilding models?

It's something I discussed at length with Markus Kuhn last week. Markus is a leading light in the Cambridge University Selfbuild group and would love to build a home for his young family here, just as his parents and sister have each done back home in Germany. Markus has been researching some of the background of the German planning system and we have been comparing notes. One of the key differences to emerge is Germany's local residence models which are used to ensure the availability of building plots for locals and to protect the market from speculators.

There were originally two such schemes, the Weilheimer-Modell and Traunsteiner-Modell, which have been widely copied and have in time been adopted in national planning law. In both, the outline planning permission process is started only after the land owner has signed contracts with the municipality or council. The municipality places conditions on any future sales which controls not only the price but also the qualifications of the purchaser. Locals are given precedence, although how local is defined is something I haven't been able to fathom.

Ireland also operates a planning system favouring locals, sometimes referred to as Grandfather Rights. Dubliners fancying a spot of rural selfbuild have only to find out where their grandparents came from and planning permission is likely to be forthcoming in that parish.

Things couldn't be more different in the UK, especially in England. Here it would be regarded as politically very dubious if one group of buyers were given preference over another simply on grounds of where they came from. We practice open access and and anything suggesting discrimination is viewed as being suspect. Indeed, we tend to pride ourselves on our liberal attitudes in this respect and we are secretly dismissive of countries which formally espouse liberal values but don't actually practise them at grass roots level.

What we do do in the UK is make concessions for affordable housing. It seems quite acceptable to bring forward schemes for affordable homes for local people who would otherwise be shut out of their villages' housing markets, but this breaks down when applied to market housing where it has to be free to all comers. As housing has become more and more expensive in the UK, the definition of affordable housing seems to grow so that it now includes key workers and even young people generally who would never be able to afford a market-priced house. Thus gradually our planning system is adopting a more discriminatory approach, but its still a long way short of what happens elsewhere.

One of Markus's interesting observations is that the home he currently lives in, which is in a 1930s suburb of Cambridge, seems to have been developed using a framework very similar to what happens in Germany today. The council appeared to have laid out the street, individual plots were sold to individuals and here and there small terraces or semis were developed by local builders for resale.

Now, if that land was made available in Britain today, it would already be optioned off to a major housebuilder to do with as they please. This sort of speculative development rarely happens in Germany or indeed anywhere else in Europe. It's the key difference in our housing markets and it's the key factor behind that bar chart. What's exceptional about our housing market isn't that there is so little selfbuild, but that there is so much speculative development.

But can the reason for this be placed on our open access planning regime? Have we cooked up a system that not only gives us pokey homes with little or no garden but also makes us mostly very anti-development. This in turn makes release of land for housebuilding very contentious, which results in very expensive building land which, in turn, means even pokier homes with even smaller gardens? Have we, in other words, created a monster of a vicious circle which protects the countryside but does very little for our new housing stock or the people that aspire to live in it?

The paradox is that whilst I have been referring to our planning system as being open access (in that it's non-discriminatory), what has happened over the past fifty years is that it's become a closed shop in which you need to be a big player to get a seat at the table. The same process which has led to the destruction of our high streets, by enabling out-of-town shopping centres and supermarkets to dominate, has also led to our new housing market becoming dominated by a few mega-housebuilders answerable only to their shareholders, the complete opposite of what the Town & Country Planning Act sought to achieve in 1947.

We could have done it differently. We could have kept speculation out of the new homes market. And we could have done it without a locals first policy, simply by insisting on owner-built homes, or some variation of the German-style policies. We would have lost more countryside, but we would have gained bigger gardens. And we might have built more houses overall and enjoyed lower house prices.

We could yet change course and encourage selfbuild, but it would have to be at the expense of the major housebuilders and that's a message which I don't think the government, for all its genuine enthusiasm for selfbuild, has really taken on board. We can have lots of selfbuild, like Germany, or lots of spec. build, as we do now, but we can't have both. Planning policies either have to discriminate in favour of the little guys (be they local or not), or they leave a vacuum to be filled by big money.
Posted by Mark Brinkley