Alan Smith, MD of Welsh Slate, had invited me to take a look around the famous Penrhyn slate quarry. 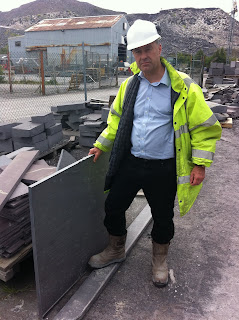 I got there at last on Tuesday and was immediately bowled over by the place. The scale — it's enormous. The location — it's dramatic, perched up on a mountainside at the edge of Snowdonia. The history — it's all pervasive and a little disquieting. Penrhyn has been operating for hundreds of years so comes with the feel of an industrial museum piece. But there are still hundreds of years worth of unworked seams lying in the ground, so it remains an incredibly important resource. And one which I slowly came to realise is both underused and undervalued.

My knowledge of the UK roofing market is fairly limited. Back in my days as a jobbing builder in Cambridge, we regularly used to do re-roofs of the Victorian housing and we always used to search out Welsh reclaims. This was in the 1980s, at a time when Spanish slates were just starting to appear in number. Reclaims you could buy for a similar amount but were by and large a better bet than the Spanish ones. Thinking about it, that in itself is pretty amazing, because these reclaims had already spent the best part of a century up on a roof, and they were still in pretty good nick. It was easy to test them. You just tapped the back of the slate with a hammer and if it gave a nice hollow ringing sound, it was a good'un. In a good batch, only about 5% were rejected. Any building product with a 95% recycling rate after 100 years has got to be pretty special, but back then we just took it for granted. In contrast, many of the imported slates were prone to cracking or splitting when being nailed on the battens.

Back then, we never went for new Welsh slate because there was no need. It was always said to be "too expensive" so we just went with what everybody else used, which was reclaims.

But I never really put 2 + 2 together before this week. There is a very good reason why new Welsh slate is "too expensive" and that is because after 100 years it is still better than most slate from other quarries around the world. And that's not an idle boast, it's pretty much down to the geology of Penrhyn. The slate hewn from this seam is a lot older than the competition (geoglogically, it's Cambrian) and because of this it has far fewer impurities. Consequently, it is harder and it barely degrades. It can sit on a roof, go through whatever sun, wind,rain and snow can throw at it for year after year and it barely has any effect on it at all. Thinking back on it, the roofs we were relaying in the 1980s were being relaid because the supporting timber was knackered and the slates were starting to slip. It wasn't the slates themselves which were at fault.

Even today, 100 yr old reclaimed Welsh slate is available to buy at around £28/m2: new Penrhyn slate costs around £50/m2, so this is a building product that holds 60% of its value for a century. Can you think of anything else to match this? In terms of whole life costing, it's an astonishing result. And looking at things this way, I realised this week for the first time that new Welsh slate isn't "expensive" at all. It's actually one of the biggest bargains out there.

By the end of my brief visit, I had become an advocate. In an era when everyone and their aunt is banging on about sustainable building materials, here is one that's produced on our doorstep, that lasts several lifetimes, looks fantastic, there's masses of it, and it requires almost no energy to produce. There's no baking, no firing, no moulding with cement, no manufacturing at all. Just sawing away from the rockface, cutting, splitting and finishing, much of this still done by hand because no one has yet invented a machine which can improve on the human eye. Go check it out.
Posted by Mark Brinkley