Should you tip your builder? 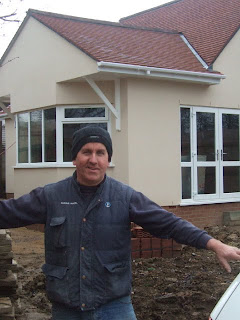 Yesterday, I spent a happy couple of hours with Chris Towns (pictured here), a selfbuilder I had met at the Homebuilding & Renovating show at the NEC just a week beforehand. Chris is building a very modest house (about 100m2) in Greenford, West London, just a stone’s throw from the A40 as it whooshes past the Hoover Building.

You don’t really get conventional building plots for sale in London and this one is no exception. It turns out to have been purchased by his father 30-odd years ago and has lain dormant for all that time because the original planning permission had lapsed and all it had managed to achieve in the intervening years was a long and ugly planning history — it’s on a tiny corner site, next to an electricity substation.

It’s only recently that a successful permission has been won, and Chris has had the financial wherewithal to build it out. There’s nothing remarkable about this house — brick and block, uPVC windows, rendered exterior under Rosemary tiles — but there is something remarkable about the way Chris has gone about building it. He tips his builders. In all the years I have been knocking around construction, I have never heard of anyone tipping their builders, other than maybe giving them a bottle at Xmas.

Chris’s logic seems sound to me. He has spent most of his adult life — he is 54 — working as a drayman for Scottish & Newcastle. In this trade, it was commonplace to receive some small offering from his clients, after almost every drop, and it was a recognised perk of the job. “You will probably think I’m mad, but I figured that everyone who worked on my site should get a drink on me, so I routinely give some cash to all the tradesmen who spend time here.”

To date he’s spent about £85,000 on getting the house to the stage you see in this photo (essentially the shell is complete and first-fix services are just starting), and this includes a horrendous £10,000 charge paid to Thames Water for drain connections, not to mention dealing with foundations in clay which went fully 3m down. I reckon that’s a result, especially for someone who has never been involved in the building trade before and had few, if any, contacts before embarking on this selfbuild. He’s been happy to act as full-time labourer-cum-gopher, and he’s kept everyone sweet by splashing the cash at the end of the week. Tips seems to range from about £20 up to £60, depending on how long they had been on site.

I’m not saying it will work for everyone, but it certainly seems to have worked well for Chris Towns. The workmanship on display was universally excellent and the finishes looked like they were going to be superb as well. The site was tidy and immaculate, and there appeared to be no outstanding niggles. It also appeared that his subcontractors were giving him really good prices for their work.

Maybe this will be the start of a trend?
Posted by Mark Brinkley