"The Housing Downturn" - a review 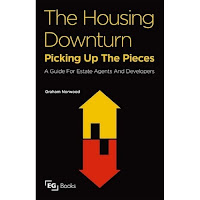 Graham Norwood is a prolific and well known property journalist who has produced a book about the state of the housing market which he has subtitled “A Guide for Estate Agents and Developers.”

There are no earth shattering revelations here but it provides a useful summary of the events of the past three years. Graham doesn’t like to use the term “Crash” for what has happened to the housing market — he suggests his journalist colleagues have debased the term — but then he buys into the notion that things will recover soon. “Even now I believe that residential prices, like oil, will rise in value over the long term and within the next decade prices will surpass those seen at the recent peak in 2007.”

What gives him such confidence in this prediction? He trots out the hoary old chestnut that there is a shortage of homes in the UK and that in the long term this lack of supply will push prices up. But he conveniently ignores the fact that this was exactly the same reason used to justify ever-rising house prices rises in the years up to 2007. If this really was the case, then house prices would never have fallen back at all. What the “correction” has shown us is that the predictions for both population growth and household formation were as much products of the long speculative housing boom as causes of it. And both these supposed “drivers” of house price rises may be just as likely to stabilise or even head south, as has happened in Germany for many years. There is no hard and fast rule that says they will continue to climb upwards for ever and a day.

And if they don’t, then there is no particular reason for house prices to bounce back to where they were in 2007, anymore than there is for the FTSE 100 to regain its previous peaks, or the oil price to go back through $147 a barrel, or wherever it got to back in the crazy summer of 2008.

The book has a good section on estate agents, a subject I don’t know much about. Apparently, Rightmove is toast. Globerix is the future, because it doesn’t charge a fat fee to the agents listing. Or maybe not. It’s not quite that simple.

And the best section of all is where Graham intrepidly goes where few reporters ever dared, to an Inside Track investor’s presentation. One of the very definite plus points of the property “correction” is that steam-ups like this can no longer happen.

On the other hand, this book itself is a very slim volume. I read it cover to cover in three sittings, totalling maybe three hours. At around £25 to buy, it’s more than a bit pricey. Nevertheless, it’s a very easy and approachable read and I feel sure it will become a valuable reference point in years to come when people try to remember what these times we are living through were like.
Posted by Mark Brinkley