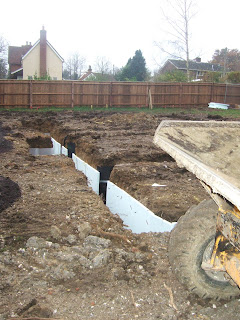 There’s a new house going up on our road. The groundworkers have just finished the excavations: it’s on a backland plot and there are tree root issues, as there often are on backland plots. The photograph shows the state of play today, ready for a foundation pour on Monday. I was talking to the builder and they’ve been asked to go down 2.4 metres in some places, plus adding slip membranes around the trenches. He reckoned that they would be using around 100m3 of readymix, around 15 truckloads.

That is one hell of a lot of readymix for a single house, although it’s not perhaps that unusual in this day and age. The NHBC in particular is incredibly hot on using shedloads of readymix concrete to overcome ground movement problems. Foundation issues are still the largest cause of claims on NHBC policies and over the years they have become more and more wary of clay ground and, in particular, tree roots. The list of species-which-spell-trouble seems to grow ever longer with every revision of the notorious Chapter 4.2 (Building near trees) of the NHBC standards.

But consider that the house at the front of the plot (on the left of the photo) is also surrounded by trees. It’s been there since the 1880s (at a guess) and I doubt very much that it has anything much in the way of foundations — the Victorians used to just spread out the bricks at the base of the wall to make up footings. And I don’t think it’s been unduly affected by subsidence. Subsidence doesn’t really happen much in our village.

So why are we putting 100m3 of readymix into the ground under this new house? The readymix alone will cost the builder at least £6,000, not to mention muck away costs for around 100m3 of spoil. And at around 300kWh/tonne, making this much concrete will release around 9 tonnes of CO2, coincidentally the same amount as the average Briton produces each year.

Remember, it’s not the weight of the house that is the issue. 300-odd tonnes of house spread out across 50 or 60 linear metres of foundations is no great load. Compared to a 40 tonne lorry being held up by a few tyres, it’s nothing. All that concrete isn’t there to hold the house up but rather to stop it moving around: the reason the foundations go so deep is to get down to ground which doesn’t shift about through the seasons.

As I surveyed the foundation trenches of this house this morning, I couldn’t help thinking of the story of Caroline Barry’s straw bale house which was built off a base of car tyres. OK, it’s maybe a little too ethnic, a little too Glastonbury for your average builder, let alone house buyer, but there’s more than a germ of a good idea here. Rather than striving to get down to bedrock, such a house would be designed to float on the ground, with the base quietly absorbing any ground movement.

Maybe it’s idle fantasy — and feel free to explain just why —but surely there must be a more intelligent way of supporting a house than just pouring more and more concrete into the ground?
Posted by Mark Brinkley