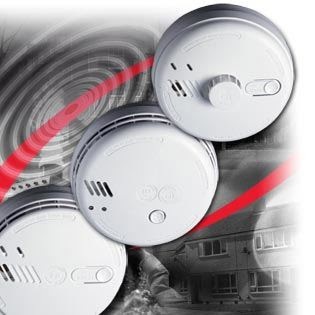 When Part B of the England & Wales building regs concerning fire protection changed in April 2007, most of the attention, as far as domestic work was concerned, went on the fact that the requirement for self-closing fire doors had been relaxed. This was good news for builders and householders because self-closers have always been very unpopular and have frequently only been fitted to please the building inspector, and have been removed once the job was finalled.

But of course, it’s never quite that simple. The reason the boffins felt relaxed enough to drop a requirement was because of the undoubted success that compulsory smoke alarms have had in preventing deaths and injuries from fire. I have heard it said that their introduction, in 1992, into the building regs has proved to be the single most effective preventative measure ever devised, and that smoke detection has rendered other safety measures largely redundant.

But there’s smoke detection and smoke detection and the latest Part B slipped in a clause about including more smoke detection in new households. Or did it? Up until now, Part B was easily met by installing detectors in the common areas (hallways, stairwells), one per floor. This is the basic standard, known in the trade as LD3. But Part B, 2007 version, suggests that smoke detection should now be carried out in accordance with the relevant British Standard, BS5839 (Part 6). Now this BS standard is calling for the superior standard LD2, which calls for detectors in high risk fire areas, principally kitchens and living rooms, as well as the common areas. If it’s to be LD2, then each two storey house would require four detectors: if it’s LD3, then just the two that we have been fitting since 1992.

You’d think it would be an open and shut case. BS5839 calls for LD2, so LD2 it must be. But the wording of Clause 1.3 in Part B1 is deliciously ambiguous. It says in accordance with BS 5839-6:2004 to at least a Grade D category LD3 standard, despite the fact that the BS specifically calls for LD2!

So what is happening on the ground. How are the NHBC and the local authority building inspectors interpreting this conundrum? Two detectors or four? It seems that the NHBC supports the move to LD2, but isn’t enforcing it. And most local authorities are following suit, though the odd inspector is insisting on the higher LD2 standard. In other words, it’s a mess.

Incidentally, there are basically three different kinds of detector. The cheapest one is the ionisation type which gets fitted into the great bulk of stairwells and hallways: it picks up small (non-visible) smoke particles and is prone to springing false alarms if situated right next to the kitchen door. In kitchens, you really need to avoid smoke detectors altogether and fit a heat detector, whereas in living rooms, especially those with an open fire or a stove, you are probably best off with an optical detector. So a typical LD2 installation would involve using all three types of detector.

Detectors generally are very responsive and this is one of their main failings — too many false alarms, causing householders to disable them in Basil Fawlty-style fits of anger. They are probably good for ten or fifteen years and then ought to be replaced if they are to continue serving their purpose. Most manufacturers have models which can be slid out of their housing without even turning off the mains, so it should be possible to replace a unit without having to rewire.

Thanks to Neil Perdell, Technical Services Manager of Aico for his help in piecing together this article.
Posted by Mark Brinkley