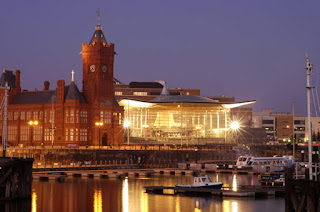 It must be a sign of the increasingly frantic times, but I am handing out my 4th Eco Bollocks award barely two weeks after Ken Livingstone got No 3. This time the recipient is an entire country, Wales, although it would be perhaps a little fairer of me to give it specifically to their legislative assembly, whose decidedly not-very-low carbon building is pictured here. They seem to have come up with an altogether novel way of combating climate change and that is to start issuing their edicts from another planet, with a view perhaps of taking up residence there sometime soon.

According to the UK government’s Planning Portal website:The Welsh Assembly Government has signalled proposals to achieve zero carbon levels for all new buildings in Wales by 2011, a move which would also entail it taking over responsibility for building regulations. Under these plans they would become a devolved matter. The UK government has already committed to achieving zero carbon standards for all new homes by 2016. The Welsh Assembly Government has stressed it wants to move more quickly.

Great move, boys and girls. Bear in mind that the world has yet to see a single zero carbon building. Indeed the world has yet to agree on what the hell a zero carbon building actually is. Hardly have we recovered from the shock of being told that England has become the first country in the world to commit itself to zero carbon housing, then up pops Wales which says “2016 is for wimps. We’ll do it five years earlier.” Do I detect the same macho posturing as displayed by Ken Livingstone who set London a 60% carbon reduction target twenty-five years ahead of the national government? I believe I do. Hence the award of the prize to the Welsh Assembly.

Environment minister Carwyn Jones said: "We will be opening discussions with the UK government on the devolution of the building regulations which would allow us to set out a standard framework, including zero carbon, for all buildings, whatever their source of funding, which is tailor made for Wales." 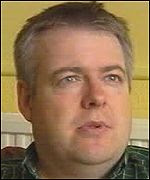 Well good luck Carwyn, pictured here. And my bullshit detector started twitching again when I read the phrase “we will be opening discussions with the UK government.” How long do you think that process will take? Let’s hazard a guess of, say, five years, which would neatly take us past the 2011 deadline and also provide an A1 excuse for not quite reaching the target.

Carwyn added: "Once these regulations are devolved, it will allow us to move further and faster on achieving zero carbon on all new buildings in Wales."

Take a tip from me. If you really wanted to save carbon emissions, you wouldn’t be pissing about rewriting a Welsh version of the building regulations. What an almighty waste of time and energy. What Europe needs is a single set of standards applicable across all frontiers, not the Balkanisation of red tape.
Posted by Mark Brinkley